Tigers to Take on Arkansas on Friday in CBS Televised Game 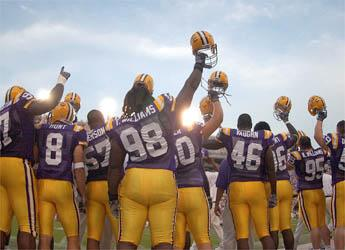 BATON ROUGE — In what has become an annual event, LSU’s football game against Arkansas in Little Rock has been moved to Friday to accommodate CBS television, the Southeastern Conference has announced.

The Tigers and Razorbacks will square off a 1:30 p.m. at War Memorial Stadium in Little Rock on Friday, Nov. 26. The game was originally scheduled for Saturday, Nov. 27.

LSU and Arkansas have played on the Friday after Thanksgiving eight straight years with the Tigers winning five of those games. LSU’s game against the Razorbacks will be televised by CBS for the ninth consecutive season.

Last year, the Tigers posted a 55-24 win over the Razorbacks in Tiger Stadium, a victory that propelled LSU into the SEC Championship Game.

The winner of the LSU-Arkansas game has gone on to represent the SEC Western Division in the league’s championship game the last three years.