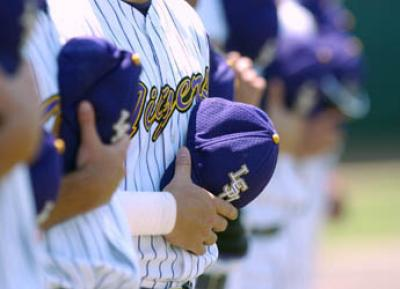 The Tigers enter the final weekend of regular season play one game behind first-place Ole Miss (17-10) and Arkansas (17-10) in the SEC Western Division. Arkansas plays host to Auburn (11-16) this weekend in Fayetteville.

Meanwhile, Georgia (17-10) leads the SEC Eastern Division by one game over South Carolina (16-11) and Florida (16-11). Georgia plays host to South Carolina this weekend, while Florida plays at Tennessee (12-15).

Should LSU, Auburn, South Carolina and Florida each win two games in their respective series, the result would be a six-way tie for the 2004 SEC title.

LSU recorded its eighth SEC series victory in nine attempts last weekend as the Tigers won two of three games versus Vanderbilt. LSU has won 11 of its last 12 conference series, dating back to last season.

Ole Miss coach Mike Bianco will counter Friday with sophomore right-hander Mark Holliman (8-2, 2.33 ERA), who is fourth in the SEC with 86 strikeouts.

Zeringue has an opportunity to set the LSU single-season record for highest batting average, a mark established by Russ Johnson, who hit .410 in 1994.

LSU leads the all-time series with Ole Miss, 150-127, as the teams first met in 1906. The Tigers hold a 9-5 advantage in games played this decade, including a 2-1 series victory last season in Baton Rouge.

LSU has won 18 of the 22 series between the clubs since 1984, and all four Ole Miss series wins have come in Oxford.

The Tigers have captured 22 of the 33 games played in Oxford since 1984, but the Rebels have won two of the last three series played at Swayze Field. Ole Miss won two of three games from LSU in 1998 and 2002 on its home turf.