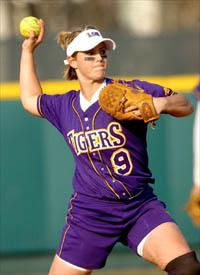 Hughes was named to the first team in the outfield. The Farmville, Va., native was also named to the first-team All-Southeastern Conference. Hughes ranks in the top 10 in the SEC in batting average, runs scored, hits, triples and stolen bases. This season she ranks fifth in single-season stolen bases in LSU history, while also ranking in the top 10 in single-season batting average. The Tiger record holder for consecutive games played without an error, Hughes leads the team with 24 multiple-hit games, fourth-most in LSU history.

A first-team selection at shortstop, Delahoussaye ranks in the top 10 in the SEC in runs scored, home runs, total bases and sacrifice fly. The team leader in double plays turned this season, the second-team All-SEC selection has recorded 16 multiple-hit games and 11 multiple-RBI games. Against nationally ranked Alabama, the Lafayette native hit two home runs and recorded six RBIs while being intentionally walked twice.

Castle was named to the first team as the designated player. A second-team All-SEC selection, the Lafayette native leads the Tigers in batting average this season and currently ranks in the top 5 in single-season batting average in LSU history. In addition, she has recorded 22 multiple-hit games, which is seventh in single-season history. Against nationally ranked South Carolina during the season series, she hit a walk-off single that knocked in the winning run in the bottom of the 10th inning.

Klein was named to the second team in the outfield after being a first-team All-SEC selection and an All-SEC Freshman team selection. The SEC All-Tournament team honoree ranks in the top 30 in the NCAA in RBIs per game this season and broke the LSU single-season home run record with her 13th round tripper of the year. In addition, she tied the school record with a 15-game hitting streak and tied the SEC single-game record with seven RBIs against Alcorn State.

A second-team selection at first base, Hill ranks in the top 10 in the SEC in batting average, slugging percentage, hits, RBIs, home runs, total bases and double plays turned. The Harahan, La., native tied the LSU single-season home run record with her 13th of the year against Georgia in the SEC Tournament championship game. Against Nicholls State she tied the SEC single-game record with seven RBIs. Earlier in the year, she broke the school record with a 15-game hitting streak and has recorded 13 multiple-RBI games this year, fifth most in LSU history.

LSU led the South Region with three players named to the first team and were one behind the nation’s best four first-team selections by Florida State and Arizona.