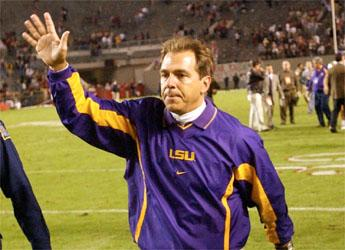 SOUTH BEND, Ind. — As the head coach at Michigan State, a trip to South Bend happened every other year for LSU’s National Champion mentor, Nick Saban. In fact, one of his most memorable coaching experiences happened in South Bend in 1983 as the defensive coordinator for then Spartan boss, George Perles, at Notre Dame Stadium.

That’s how Saban started his talk on Wednesday, as The College Football Hall of Fame brought him to South Bend’s Century Center as the featured speaker for the May 19th KeyBank Gridiron Legends Luncheon. Over 350 were in attendance for the luncheon, the third of six in the 2004 Series.

“After warm ups we went back into the locker room after seeing how big Notre Dame was, hearing the crowd and hearing their band,” Saban recalled. “You could hear a pin drop as our young men looked scared to death. Finally, Coach Perles said to the team, ‘I don’t know what kind of football team they have but they sure have one hell of a band.'”

Upon breaking the ice, Michigan State went out and pulled off the upset over Gerry Faust’s Fighting Irish, 28-23. Saban has had a couple other memorable days at Notre Dame Stadium as MSU’s Head Coach in between that 1983 visit and today’s return to South Bend. In 1997 his Spartans won at Notre Dame 23-7. Two years later they pulled off another win on the Irish turf, 23-13.

Though he’s changed jobs, Saban hasn’t changed his philosophy, which continues to produce winning results. Adding the 2003 National Championship to his resume in Baton Rouge is proof that it works, even if the winning part isn’t what makes him most proud.

“In all of my 31 years of coaching, this is the first team I have been a part of that met all of its goals and not one of them had to do with winning a football game,” Saban said of his 2003 LSU Tigers. “They set and met their goals which were to be a team, have a positive effect on each other, be responsible for your actions and be a champion on and off the field.

“And that’s what makes me most proud of being part of the LSU program,” he continued. “We are providing leadership and education to a group that has made a commitment. We should help these kids launch their careers when they leave here.”

“We live in a result-oriented world,” he said. “We have to focus on what it takes to be successful and remember that process. We need to learn the consequences of our mistakes.

“We have to focus on being the best we can be at what we do and take advantage of our gifts,” he continued. “That’s the only way to create ‘the feel good.'”