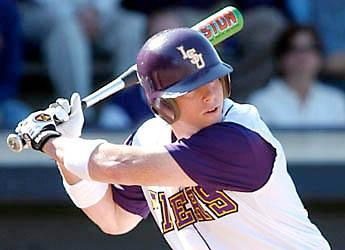 Will Harris and Blake Gill led the 17-hit parade, going a combined 4-for-5 with four runs and five RBI. Both launched two-run homers.

“Coach (LSU coach Smoke Laval) was preparing us all week to come out and swing well and get us ready for this weekend,” said Harris. “Every game really counts from now on.”

Clay Harris collected his second three-hit game of the season with a 3-for-5 effort on Wednesday.

After surrendering back-to-back homers in the first inning, freshman starter Michael Bonura (4-0) settled down to pick up his fourth win of the season. The right-hander went 4.2 innings, allowing two runs while scattering six hits and firing two strikeouts.

Wednesday’s matchup was a make-up game that was originally scheduled for March 14 but was postponed due to rain.

For the second time in as many games, the Tigers surrendered a leadoff home run to start the game. Just as Vanderbilt’s Ryan Klosterman did on Sunday, shortstop Anthony Garibaldi belted Bonura’s first pitch over the centerfield batter’s eye.

One batter later, Tony Suarez unloaded on Bonura’s 1-2 offering for his second homer of the season.

LSU responded and tied the game at 2-2 in the bottom half of the first. Jon Zeringue’s RBI grounder drove in J.C. Holt, who reached on a leadoff walk. Zeringue would later score on a passed ball.

After retiring six consecutive hitters between the second and fourth innings, Weinmunson allowed a two-out single to Ivan Naccarata, an at-bat that ignited a five-run fourth.

Will Harris followed and hammered a run-scoring double into the left-center field gap, but it was Blake Gill’s two-run homer over the right-center field wall that changed the complexion of the game.

Gill’s two-run shot — his fourth of the year — gave the Tigers a 5-2 advantage they would not relinquish. The next three hitters would follow with two-out singles, including an RBI hit by Dustin Weaver. Before Weaver’s single, J.C. Holt would score his second run of the game, capitalizing on left fielder Ryan Spencer’s fielding error.

Three of the five Tiger dingers came in the late innings as Ryan Patterson, Clay Harris and Bobby DiLiberto each homered.

Diliberto’s homer, a pinch-hit, solo-shot in the sixth, was his second pinch-hit homer of the year. He drilled a three-run homer in the series finale versus Kentucky on May 9.

“Maybe the focus has started,” said Laval. “That is as good as an offensive show that we have had. We hit some doubles and some homers, so maybe they are starting to turn it up. Maybe there is a sense of urgency.”

With as many as six teams fighting for first place in the Southeastern Conference, the Tigers will begin their most important series of the season Friday night at 6:30 p.m. against ninth-ranked Ole Miss in Oxford.