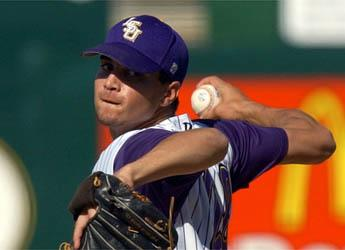 The game can be heard on the LSU Sports Radio Network, including flagship WDGL-FM 98.1 in Baton Rouge. The radio broadcast and live stats may be also be accessed at www.LSUsports.net.

Wednesday’s LSU-SLU matchup is a make-up game for the March 14 contest between the clubs that was rained out. Fans who present their March 14 game ticket stub will be admitted free of charge.

LSU and SLU have met three times this season, with the Tigers winning all three games. LSU defeated the Lions by scores of 7-1 and 5-1 on March 12-13 in Alex Box Stadium, and the Tigers posted a 9-3 victory over SLU on April 14 at Zephyr Field in Metairie, La.

LSU coach Smoke Laval will send freshman right-hander Michael Bonura (3-0, 4.71 ERA) to the mound Wednesday. Bonura will make his first start since he faced SLU at Zephyr Field on April 14. He worked four innings in that contest, allowing three runs on four hits with three walks and three strikeouts.

SLU coach Dan Canevari will counter with senior left-hander Mark Weinmunson (2-4, 8.05 ERA) on Wednesday. Canevari, a member of the LSU staff from 1991-2002, helped lead the Tigers to all five of their NCAA championships under former coach Skip Bertman.

LSU recorded its eighth SEC series victory in nine attempts last weekend as the Tigers won two of three games versus Vanderbilt. LSU has won 11 of its last 12 conference series, dating back to last season.

The Tigers enter the final weekend of regular season play one game behind first-place Ole Miss (17-10) and Arkansas (17-10) in the SEC Western Division. LSU plays at Ole Miss this weekend, while Arkansas plays host to Auburn (11-16).

Zeringue has an opportunity to set the LSU single-season record for highest batting average, a mark established by Russ Johnson, who hit .410 in 1994.

Left-hander Lane Mestepey, making his first weekend start since March 20 at South Carolina, pitched very effectively in Game 1, allowing just one run on seven hits in 6.1 innings with three walks and one strikeout.

Right-hander Jordan Faircloth relieved Mestepey in the seventh and pitched the final 3.2 innings to win the 3-2, 10-inning contest. Faircloth allowed one run on three hits with no walks and three strikeouts.

LSU has won six of its nine extra-inning games this season, and the Tigers improved their record to 7-4 in one-run contests.

Laval is 16-5 against the Lions during his 10-year collegiate coaching career, including a 6-1 mark as LSU’s coach.

The Tigers enter the Wednesday’s game with a 12-1 mark this season against Louisiana schools. LSU has won 15 of 16 games versus its in-state foes over the past two seasons.

LSU has a 40-9 record against Louisiana schools during Laval’s three-year tenure as head coach.