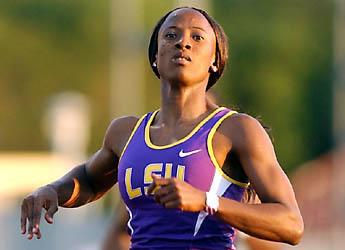 OXFORD, Miss. — Six individual conference titles Sunday weren’t enough to lift the Tigers and Lady Tigers to team gold at the SEC Track and Field Championships, but LSU certainly wasn’t lacking for exceptional performances during the final day of competition at the Ole Miss Track and Field Complex.

A school record, a world-leading mark by Hazelann Regis in the 400 meters and a combined 11 All-SEC performances by the top-ranked Lady Tigers and the second-ranked Tigers highlighted the conclusion of the four-day competition.

“Lots of really good things happened today,” said LSU head coach Pat Henry. “If I look across the board I can’t be anything but pleased.”

In the team race, the Lady Tigers scored 114 points to finish second to Arkansas (124) in the final standings. The men tallied 93 points to place fifth overall. Arkansas (183) was crowned the men’s team champion for the second straight year and the 12th time in the last 13 seasons.

Individual conference titles seemed to come in a steady stream for LSU Sunday as the All-American foursome of Lolo Jones, Monique Hall, Stephanie Durst and Muna Lee kicked off LSU’s winning ways with the successful defense of their SEC title in the 4×100-meter relay. The quartet extended their unbeaten streak in the event to 13 straight races in claiming their third consecutive conference crown in 43.15.

Jones then defended a second SEC title, winning the 100-meter hurdles for a third straight year. The nine-time All-American clocked 12.83 to complete the sweep of the SEC indoor and outdoor hurdle crowns for a third consecutive season.

In the 400 meters, Lady Tiger Hazelann Regis and Tiger Kelly Willie were sensational in adding SEC Outdoor titles to their indoor 400 crowns earned earlier this season in Lexington, Kent.

Willie clocked the world’s fourth-fastest 400 meter time this year (45.16) in winning the third conference title of his career.

Regis then capped off a phenomenal day of competition by anchoring the Lady Tiger 4×400-meter relay to a conference title in school record time (3:27.04). Regis was joined by Nadia Davy, Monique Hall and Neisha Bernard-Thomas who combined to win the Lady Tigers’ first outdoor championship in the event since the 1998 season.

Senior Maria Romero captured LSU’s final individual title, winning the women’s javelin with a toss of 138-3. The win marked the first for a Lady Tiger in the event since the 1988 season when All-American Cheryl Coker also finished first at the conference meet.

LSU also had several performances that didn’t garner gold, but were none less noteworthy.

The Tigers’ All-American trio of LeJuan Simon, Willie Bradley and John Moffitt tallied 19 points in finishing 2-3-4 in the men’s triple jump. Simon earned his second all-conference honor of the weekend, placing second overall (53-2 3/4). He was followed by Bradley (52-2) and Moffitt (51-11 3/4).

All-American sprinter Muna Lee picked up a pair of second-place finishes of her own, earning All-SEC honors in both the 100 (11.25) and 200-meter dashes (22.98). The six-time national champion finished second to Arkansas’ Veronica Campbell in both races, despite clocking a season-best in the 200 and matching her season-best in the 100.

The Tigers were solid in the javelin as sophomores Pat Perrien and Brandon Racca both racked up points towards the team total, finishing fourth and fifth, respectively. Perrien improved on his PR by nearly six feet, throwing 208-1, while Racca finished with a final distance of 199-1.

LSU will enjoy a weekend off before returning to action, May 28-29, when it hosts the NCAA Mideast Regional Championships at Bernie Moore Stadium.