Tigers' Season Ended by Rice, 4-0 in NCAA Second Round 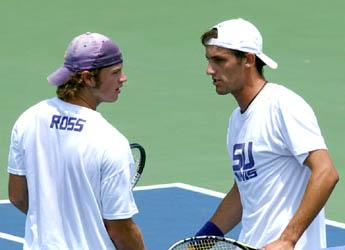 BATON ROUGE — A vicious top of the lineup for Rice and a cruel trick by Mother Nature led to an LSU loss Sunday in the second round of the NCAA Tournament. The Owls won, 4-0 in a match that was delayed and moved due to rain during the doubles point.

The Tigers’ 13th-ranked duo of Jason Hazley and Bryan Fisher led Rice’s No. 1-ranked pair, Richard and William Barker, 7-6, when the match was delayed.

“We had gained the momentum at that point,” said LSU head coach Jeff Brown. “We had a lot of things going in our favor.”

The match was moved across town to the Country Club of Louisiana, where it began almost four hours later.

“Rice has played as many times on these courts as we have,” Brown said. “We’ve never played here. You’ve got to overcome the adversity, but we lost our home court advantage, which is something we worked for all year.”

LSU’s Cory Ross and Sebastian Rutka won their match at No. 2 over Vuk Rajevak and Konstantin Haerle. The Owls answered with a win on court No. 3 by Robert Searle and Ben Harknett over Ken Skupski and Peter Richman.

Five and a half hours after the doubles point began it resumed. The Barkers, who have not lost a dual match since 2001, broke LSU’s serve. They went on to win the next two games and clinch the point to give Rice an early lead.

“We lost the momentum over the four hour break,” Brown said. “It’s no excuse–Rice had the same break and they played great.”

With only three courts at the indoor facility, Rice got to use its top three singles players to begin play. They picked up three straight-set wins to finish the match and advance to next week’s Sweet 16 in Tulsa, Okla.

“Rice’s top three points were the three points they had on the court,” Brown said. “I would have liked to seen what we could have done at four, five and six.”

“I think their best point is their No. 2 guy,” Brown said. “Their No. 1 guy played great, and the Barkers are phenomenal.”

Rutka led Haerle, 4-2 in the first set when the match was called.

“It’s unfortunate that (the season) ends now,” Brown said. “Unless you win a championship, it’s always going to be a sad last day. It’s sad for the seniors to not keep going on.”

Seniors Fisher, Ross and Rutka ended their dual-match careers with Sunday’s match. Fisher and Hazley will play later this month in the NCAA Indoor Doubles Championships in Tulsa. Skupski will also play in the singles tournament.