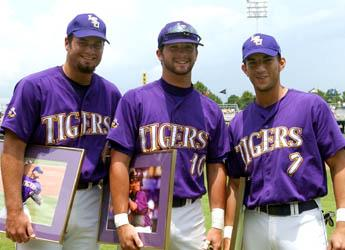 Buschmann (7-1) became the first opposing pitcher to hurl a complete-game shutout against the Tigers this season. Tulane held the Tigers scoreless in a 1-0 decision on April 6 with the combination of pitchers Brian Bogusevic and Joey Charron.

The Tigers play at Ole Miss next weekend to conclude the regular season.

Vanderbilt (35-16, 13-14) salvaged one game during the weekend after dropping two one-run extra-inning contests on Saturday. The Commodores close out their SEC regular- season schedule against Kentucky next weekend.

Klosterman wasted little time to begin his three-RBI day by depositing LSU starter Nate Bumstead’s fourth pitch of the game into the left field bleachers for a lead-off home run.

The Commodores homered again to lead off the top half of the second as Cesar Nicolas took Bumstead’s first pitch over the left field wall to make it a 2-0 contest.

Nicolas finished the game 2-for-4 with two RBI and one run.

Meanwhile, Buschmann handcuffed the Tigers early thanks to a pair of outstanding defensive plays by Klosterman and third baseman Tony Mansolino. Both made diving stops to retire the speedy J.C. Holt in the third and fifth, preventing the Tigers to create any kind of scoring threat.

At 2:11 p.m., a steady rain began to fall, forcing officials to postpone the game with Vanderbilt batting in the top of the sixth with a runner at second and no outs.

Freshman Clay Dirks came on in relief of Bumstead after a 1 hour, 35 minute rain delay as play resumed at 3:46 p.m. Dirks immediately fell into trouble, allowing Antoan Richardson to reach on a 1-2 bunt single, moving Klosterman over to third.

Warner Jones followed and knocked in his third run of the weekend, grounding out to shortstop Blake Gill. The run closed the book on Bumstead (8-3) who allowed three runs — all earned — on six hits, while fanning four over five innings.

“I made a couple of mistakes, and they took them out of the ball park,” said Bumstead, who was one of three seniors honored during Senior Day events. “That is just the way it goes. We have to rebound next week and take it one game at a time from here on out.”

Nicolas closed out the two-run sixth, lining a run-scoring single into left field for his second RBI of the game.

Buschmann, unfazed by the rain delay, came out in the sixth and picked up right where he left off. He fanned Jon Zeringue, the conference’s leading hitter, for the third time in the game.

The sophomore right-hander surrendered just three hits the rest of the way, working a perfect ninth to secure his first complete game. He allowed just one extra base hit, that coming off of the bat of Matt Liuzza in the fifth.

“To hold us to six hits, you have to think he’s pretty good,” said LSU head coach Smoke Laval. “I thought after the rain delay we got some good swings in, but before that we didn’t outside of (J.C.) Holt.”