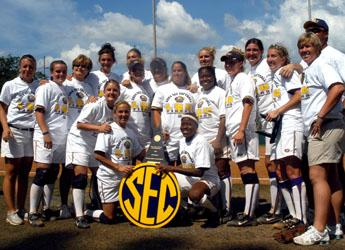 TUSCALOOSA, Ala. — Most Valuable Player Kristin Schmidt earned a win and a save on Sunday as the second-ranked LSU softball team defeated Auburn, 1-0, before coming back to claim the SEC Tournament Championship with a 4-1 win over Georgia in the title game at the Alabama Softball Complex.

With their fourth tournament championship in the last six seasons, the Tigers improved to 50-10 on the year, marking the seventh-consecutive season that the program has reached the 50-win plateau. Georgia dropped to 51-15 on the season, while Auburn fell to 42-16 on the year.

LSU will now await its seeding in the NCAA Tournament after earning the SEC’s automatic berth. The regional pairings will be announced Sunday between 7:30 p.m. and 8 p.m. on ESPNews. The Tigers will make their seventh consecutive appearance in postseason play after claiming sweeping the three SEC awards – division, regular season championship and tournament championship -for the fourth time.

“This is such a special team,” said LSU head Yvette Girouard. “No one voted us to win any awards at the beginning of the season. This was also the first year that we didn’t go into the year saying that we wanted to win championship but we won.”

Earning her second-consecutive MVP honor, Schmidt went 3-0 in the tournament with a save, while posting a 0.31 earned run average. In four appearances, she allowed just one run on 13 hits with 24 strikeouts. Against South Carolina in the opening round, she tied the SEC Tournament single-game record with 14 strikeouts.

Leslie Klein also earned All-Tournament honors for the Tigers. She hit .313 in five games with a home run, an RBI and three runs scored. In addition, she was 1-for-1 in stolen bases and made 10 outstanding putouts in the field.

In the championship game, Stephanie Hill tied the LSU single-season home run record with a three-run shot in the bottom of the fourth inning that broke open a scoreless game. After Georgia got on the board in the top of the sixth, the Tigers answered back as Hill recorded an RBI single that ran the score to 4-1.

“Stephanie has been struggling at the plate, but she battled through the at bat and came away with the big blow of the game,” said Girouard. “This is not a team of superstars, they are 14 kids with incredible heart.”

Emily Turner started and went five and two-thirds innings to earn the win and improve to 18-5 on the season. She allowed one run on five hits with a walk and four strikeouts. Schmidt came on in relief in the sixth and allowed just one hit in an inning and a third to earn the save, her third of the season.

“We got exactly what we wanted to out of Emily today,” said Girouard. “We wanted to save Schmidt for Regionals, but after the home run, I decided to put her in and she was great.”

Schmidt started and earned the complete-game win against Auburn to improve to 31-5 in the first game. In her 12th shutout of the season, she faced just two over the minimum, allowing just three hits while striking out five. An RBI single by LaDonia Hughes in the top of the fifth inning scored Julie Wiese for the only run of the game.

“We just battled through the first game,” said Girouard. “We played every pitch, every play and came out with the win.”

In the top of the second in the championship game, Georgia got back-to-back singles with two outs to move a runner into scoring position for the first time in the game. Turner then got Julie Milner to pop out to her in the circle to end the inning.

Lauren Castle led off the bottom of the fourth inning with a walk for the Tigers. After a fielder’s choice put Klein on first and got Castle going to second, Leigh Ann Danos drew a walk to put runners on first and second.

Stephanie Hill then nailed a line-drive shot over the left field fence that gave the Tigers the 3-0 lead. The 13th home run of the season for Hill tied Leslie Klein for the LSU single-season record.

With two outs in the top of the sixth inning, Georgia got on the board. Ashley Godfrey homered to left center field to cut the Tiger lead to 3-1. Megan McAllister then doubled to left field to bring the tying run to the plate for the Bulldogs. Kristin Schmidt came on in relief and got Courtney Knight to ground out to end the inning.

LSU answered back in the bottom of the inning. Leslie Klein led off with a single to left field. A walk to Danos put runners on first and second. Hill then singled to left center, driving in Klein from second to give the Tigers the three-run cushion once again.

A harmless single in the bottom of the seventh was all the Bulldogs would get off of Schmidt as she retired four of the five batters she faced to end the game.

In the top of the second inning in the morning game, Lauren Delahoussaye reached on an error by Auburn shortstop Ashley Griffin to lead off the inning. An infield ground out by Hill moved Delahoussaye into scoring position with one out.

Leigh Ann Danos then drew a walk to put runners on first and second, but LSU could not take advantage. Julie Wiese struck out swinging and Sara Fitzgerald flew out to left field to end the inning.

Auburn broke up the perfect game by Schmidt in the bottom half of the inning with a bloop single down the left field line with one out. Schmidt came back to strike out Lauren Walton and get Kristina McCain to fly out to left field to end the inning.

The top of the fifth proved to be very eventful. Wiese reached on an error by the shortstop to lead off the inning. She advanced to second on a sacrifice bunt by Fitzgerald. A single to right center by Camille Harris moved Wiese to third.

Harris was then called out for leaving early on a steal attempt. Girouard was ejected from the game for arguing the call with the first base umpire after the play. She had also taken issue with Auburn pitcher Kristen Keyes pitching motion, which she felt was illegal and was not being called by the first base umpire.

With Wiese on third, Hughes singled to right field to score Wiese and give LSU the 1-0 lead. After the play, assistant coach James DeFeo was ejected from the game by the home plate umpire for arguing Keyes pitching motion. Hughes was then thrown out trying to steal second.

In the bottom half of the inning, Sara Ghezzi doubled to right field with one out. For the third time during the tournament, however, Leigh Ann Danos came through behind the plate, picking Ghezzi off going back to the bag at second. Schmidt then struck out Martha Phillips to end the inning.

In the bottom of the seventh, Shannon led off with a single to left field for Auburn. After she was sacrifice down to second base, Wiese made a great play on a line drive by Paige Jones for the second out. Wiese then threw out Ashley Griffin on an infield ground ball to end the game.

Beth DiPietro started and took the loss for Auburn to fall to 6-3 on the season. She allowed one unearned run on two hits with a pair of walks and one strikeout. Keyes came on in relief in the fifth and allowed one hit while striking out two.

The LSU win avenged the 2-0 loss to Auburn on Saturday night and evened the season record to 2-2 after the pair split a doubleheader in Baton Rouge earlier in the year.