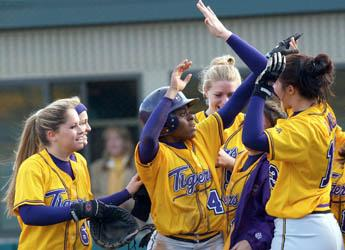 TUSCALOOSA, Ala. (Auburn Sports Info) — Top-seeded LSU capitalized on an error to score the lone run of the game to beat the fourth-seeded Auburn, 1-0, on Sunday morning with a trip to the Southeastern Conference Tournament Championship Game on the line.

The Bayou Bengals reached the tournament final for the sixth straight year and will go for their fourth conference tournament title in the 1 p.m. finale against Georgia. Auburn returns home to await its fate from the NCAA Selection Committee, which will announce the NCAA Tournament field Sunday at 7:30 p.m. on ESPNNews.

The two teams began the game less than eight hours after Auburn’s 2-0 victory on Saturday night which forced the game. It was the second time in three games the Tigers were forced to rebound quickly after a late game.

“This was what college softball was all about,” said Auburn head coach Tina Deese. “Both teams coming out after four hours sleep and giving it their all and having a game like this. It was a great game.”

Fireworks flew in the fifth as LSU plated its run. Julie Wiese reached on shortstop Ashley Griffin’s error to lead off and went to second on a sacrifice bunt by Sara Fitzgerald. Camille Harris then singled, but was called out for leaving first base early on the next pitch as she tried to steal.

LSU coach Yvette Girouard was thrown out of the game after arguing the call with first base umpire Donnie Teague.

When all was said and done, LSU had a 1-0 lead but was down to one full-time coach.

Prior to that, Auburn’s freshman starter, Beth DiPietro, had been spectacular in keeping the nation’s third most proficient offense in check. She worked 4 1/3 innings and allowed just two hits and struck out one while walking two. DiPietrwo was charged with an unearned run and took the loss to fall to 6-3. Each of the past six runs she has allowed have been unearned.

“We got a tremendous outing from Beth,” said Deese. “You can’t ask anything more from a freshman in that situation. She did exactly what we asked her to today.”

Kristen Keyes entered in the fifth and gave up one hit, the single to Hughes, in 2 2/3 innings. She extended her scoreless-inning streak to 17 2/3 innings.

On the offensive end, Auburn seemed to be getting to starter Kristin Schmidt by the fourth inning as the team was making solid contact. However, the ball always seemed to find a glove.

Auburn’s first offensive threat was a short one in its half of the fifth as Sara Ghezzi laced a one-out double to right-centerfield. However, LSU catcher Leigh Ann Danos caught pinch runner Robin Martin a little too far off the bag and picked her off two pitches later. Martha Phillips then struck out to end the inning.

In the seventh, Anderson led off with a single to left and was sacrificed over by Sara Dean. Paige Jones then laced a shot off Schmidt, however it went straight at the third baseman Wiese, who didn’t have to move to make the catch.

Ashley Griffin, who had the game-winning RBIs in both Auburn wins over LSU earlier this year grounded to third to end the game.

“There was no doubt in my mind when I got on that we were going to score,” said Anderson. “I knew one of the players behind me (in the order) was going to knock me in and I was ready to go. (On Jones hit), I thought that was it and I was about to get on my horse, but it was right at her. What are you going to do.”