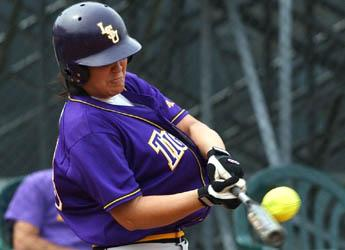 TUSCALOOSA, Ala. — Second-ranked LSU gave up two runs in the top of the first as 14th-ranked Auburn held on for the 2-0 win in the third round of the SEC Tournament late Saturday night at the Alabama Softball Complex.

The loss dropped LSU to 48-10 on the season, while Auburn improved to 42-15. After playing until 12:05 a.m. Sunday morning, the pair will now return for a rematch less than nine hour later at 9 a.m.

The winner of that game will advance to take on Georgia in the championship game at 1 p.m. In a game that lasted almost five hours because of two hours of rain delays, the Bulldogs were 4-0 winners over Tennessee in 10 innings courtesy of a walk-off grand slam by Shannon McKeon.

Emily Turner started and took the loss for LSU to fall to 17-5 on the season. She allowed two runs on seven hits with a walk and two strikeouts.

Auburn threw ace Kristen Keyes, who earned the complete-game win to improve to 27-10. She allowed just one hits with two walks and six strikeouts.

“Keyes threw a pretty good game, but I was very disappointed with our discipline and execution at the plate,” said LSU head coach Yvette Girouard. “Give credit to Auburn for getting the win and now we have to regroup and come back to play tomorrow morning.”

Two runs by Auburn in the top of the first inning on a double by Martha Phillips proved to be the game winner. With one out, Shannon Anderson reached on a bunt single. She advanced to second on an infield single off of the glove of Turner in the circle by Sara Dean. After a double steal moved Anderson to third and Dean to second, Ashley Griffin doubled to right center to score both runners.

In the bottom of the fifth inning, LSU had its best chance, but could not convert. Lauren Delahoussaye was hit by a pitch to lead off the inning. Leigh Ann Danos then broke up the no-hitter by Keyes with a single to left field. An error by Keyes then loaded the bases with one out, but LSU could not push a run across as Camille Harris struck out swinging and LaDonia Hughes flew out to deep right field to end the inning.

In the bottom of the seventh, LSU got the tying run to the plate with two outs after Keyes walked Julie Wiese. Sara Fitzgerald then popped out to a diving Ashley Griffin at shortstop to end the game.

The loss snapped LSU’s three-game winning streak over Auburn in the SEC Tournament. The purple and gold are now 3-2 all-time against AU in the tournament.