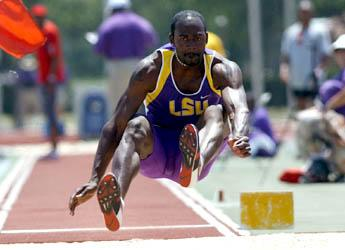 OXFORD, Miss. — A strong day in the field and 11 qualifying marks highlighted the third-day of competition for the LSU track and field team at the SEC Outdoor Championships Saturday.

“I was really pleased with how the field events went today,” said LSU head coach Pat Henry. “John (Moffitt), LeJuan (Simon) and Tina (Harris) all looked great in the long jump and for Joe (Lochridge) to step up and score in the shot put was huge.”

The All-American duo of LeJuan Simon and John Moffitt finished 2-3 in the men’s long jump, while Lady Tigers Tina Harris and LaToya Payne recorded fourth and eighth-place finishes, respectively, in the event.

Simon, who sat in fourth place though the majority of the competition, jumped 26-0 1/4 on his final attempt of the day to slide into second and earn all-SEC honors. Moffitt, nursing a strained groin, followed with his leap of 25-10 1/4.

Other finals included the men’s decathlon that was extended to a third day of competition because of rain storms in the area Friday evening. Sophomore Kwami Roberts turned in solid efforts in the pole vault, javelin and 1,500 meters Saturday to finish third overall with 6,943 points.

Roberts cleared a season-best 12-3 1/2 in the pole vault, but it was his time of 4:55.29 in the 1,500 meters, the final event of the competition, that catapulted him from fifth to third in the final standings.

On the track, freshman Roland LeBlanc scored a point for the Tigers in the 3,000-meter steeplechase, placing eighth overall. LeBlanc bettered his PR in the event by over 11 full seconds to finish with a time of 9:24.03.

In prelim action Bennie Brazell, the current NCAA leader in the men’s 400-meter hurdles, lived up to his No. 1 ranking in the event. The eight-time All-American set the track record en route to the posting the top qualifying time of the day (50.09).

The Tigers also advanced two athletes in the 400 meters. Sophomore Kelly Willie and senior Pete Coley qualified with the fifth (46.41) and ninth-best (46.91) times of the day.

For the Lady Tigers, Lolo Jones and Muna Lee will each be back to defend their individual conference titles Sunday.

Jones will be seeking a third straight 100-meter hurdles crown after posting the field’s second-fastest mark in the qualifying rounds (13.09). She will be joined by fellow Lady Tigers RaNysha LeBlanc (13.18) and Brittany Littlejohn (13.32) in the finals.

In the 100 meters, Muna Lee will be chasing conference history as she attempts to become the first athlete, man or woman, in SEC history to ever win four straight 100-meter dash titles. The 17-time All-American advanced to the finals with the field’s third-fastest time (11.35). She will be joined by All-American Stephanie Durst, who also qualified to the finals, running 11.54 in her season debut in the event.

“We didn’t look real sharp in some areas today, but we did advance,” said Henry. “I think we need to come into a meet like this little better prepared. Prelims in this type of meet are not prelims. They are a final one day and a final another day. We are just going to have to come back tomorrow and get after it.”

Action from the 2004 SEC Championships will conclude Sunday with the crowning of both the men’s and women’s team champions. Competition in the field events will begin at 1 p.m. and running events will follow at 6 p.m.