Tigers No Stranger to Hostile Crowds 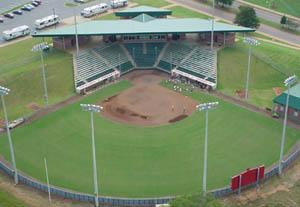 Since the LSU softball team will go on the road for its NCAA Regional appearance, could anything have been better for this team’s confidence then the 2-1 win over Alabama Friday night at the Alabama softball complex.

Nowhere else, unless Oklahoma meets LSU in the Women’s College World Series, will LSU have to face the type of crowd it faced Friday night. And that’s meant in a good way. This game showcased the SEC Tournament as never before in its eight-year history. This was the league coaches had been dreaming of. A full house, a crowd into the game with every pitch and no matter whom you were rooting for, you left totally drained and even wanting more.

For LSU it was a great win. It also gave them the potential to have a much easier weekend. They have a chance to only play four games (with a Saturday night win) and make the trip home to prepare for the next most important trip — the NCAA regional.

For Alabama, it may just have been too much rivalry to overcome. First, an emotional post-midnight battle with Auburn (with 400 fans still in the stands after 1 a.m.), then the growing rivalry game with LSU before over 1,100 fans with more plot twists than the final episode of Survivor. When the Crimson Tide had to come up and play first thing Saturday morning against Tennessee, there may have been nothing left in the tank as Tennessee won, 1-0. But in the end, it may be a good thing for Patrick Murphy’s team, which would have had to win four games in two days to repeat as champion. Now his team can regroup and get ready for a regional somewhere.

The Alabama softball team reminds me a lot of the LSU baseball fans. They are very passionate, they recognize good play on both sides and they are very proactive. They try to get their team fired up in preparation for a rally. Sometimes the LSU softball crowd can be a bit reactive, waiting on Yvette Girouard‘s team to do something to make them cheer and holler. They are loud when that happens, but maybe they can bring a little of this atmosphere back to Tiger Park next season.

It will be interesting to see what the crowds will be Saturday night and Sunday without the Crimson Tide. It won’t be as big, but there will be more for a final than any of the last few years. Of course, circumstances help. It didn’t hurt that Alabama, Auburn and Mississippi State all qualified for the softball tournament, while the baseball organizers in Birmingham are sweating that those three teams aren’t going to make it to Hoover Met.

How can you not admire the guts and effort Kristin Schmidt showed pitching Friday night against Alabama’ The mark of a good pitcher is how they react when their best stuff is getting to the plate in the place they want it and Schmidt just gave a gutsy account of how good she is. Plus I’ve never seem the emotion she showed last night as she had to battle Alabama and one of the most inconsistent tournament strike zones every seen by the home plate umpire and suddenly, Schmidt was sparking her whole team with yells of success and scowls of frustration. Somewhere, there needs to be a spot on an All-American team again for this senior.