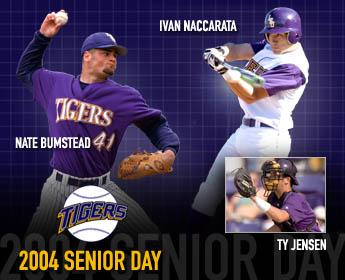 Catcher Matt Liuzza’s one-out RBI sacrifice fly in the bottom of the 10th inning allowed pinch-runner Rhett Buteau to score, giving LSU a dramatic 3-2 win over Vanderbilt in the first game of the doubleheader.

Buteau entered the game after Will Harris led off the frame with a single. He reached third base after a pair of walks, one intentionally surrendered by starter Jeremy Sowers and one by reliever Jensen Lewis.

The Tigers snapped a three-game SEC Game 1 losing skid, in large part due to the efforts of junior left-hander Lane Mestepey, who hurled 6.1 strong innings in his most impressive outing of the season. Though not involved in the decision, Mestepey scattered seven hits and allowed one run while firing 79 pitches.

“That was by far the best I have thrown this year,” said the Zachary, La., native. “I had control of my fastball on both sides of the plate and threw my curveball well when I needed to.”

Mestepey made the most of his second SEC start this season and his first since facing South Carolina on March 20.

“Things worked out well and you just have to make the most out of your opportunity,” said Mestepey. “We will see what he (LSU coach Smoke Laval) wants to do next week. If he gives me the ball again I will be more than happy to take it.”

Both teams made crucial defensive plays to end scoring threats. LSU second baseman Ivan Naccarata took away a game-tying single away from Cesar Nicolas in the fifth on a leaping catch in shallow right field. Vanderbilt center fielder Antoan Richardson scaled the right-center field wall to rob Naccarata of a game-winning hit in the ninth.

LSU designated hitter Nick Stavinoha went 3-for-4 and ignited the first scoring rally of the game on a leadoff double to start the bottom of the second. He would eventually come around to score as the Tigers manufactured a run on a pair of groundouts. Will Harris’ grounder to second baseman Warner Jones enabled LSU to take a 1-0 lead.

Jones, entering Saturday’s contest with the second highest batting average in the SEC (.418), was the Commodores leading hitter in Game 1, going 2-for-4 with one RBI.

Liuzza broke the 1-1 tie in the third, drilling a two-out, solo homer. The Tigers could have added another run as Stavinoha worked an 11-pitch at-bat against Sowers before lining a single through the left side. Jon Zeringue rounded third base, but Clay Harris was thrown out at second base as he overran the bag before Zeringue could touch home.

Mestepey fell into trouble in the seventh, allowing the first two hitters of the inning to reach base. After Mike Baxter laid down a sacrifice bunt, Mestepey intentionally walked Jones to load the bases and set up a force play.

Junior reliever Jordan Faircloth entered the game with the bases-loaded jam, looking to hold the one-run lead. Faircloth, who escaped a bases-loaded threat in relief of Mestepey on April 27 against Tulane, succeeded again. He set down Nicolas on strikes and got Aaron Garza to ground out to end the frame.

Vanderbilt catcher Jonathan Douillard’s RBI single knotted the game at 2-2 in the eighth.

Faircloth (3-3) collected the win, allowing one run on three hits in 3.2 innings.

LSU right fielder Jon Zeringue tied a school record with five hits, including the game-winning RBI single in the bottom of the 11th, as the Tigers erased a four-run deficit to capture a 7-6 victory over Vanderbilt in the second game of the doubleheader.

Zeringue lined a 1-2 Ryan Rote offering up the middle to score pinch runner Derek Hebert after Matt Liuzza led off the inning with a single.

“A home run would have been nice, but I’ll take it,” said Zeringue, who finished the game a career-high 5-for-6. “I had a good day. I was seeing pitches well, hitting the ball where the players weren’t and getting some good fortune.”

Recently named a 2004 Golden Spikes Award nominee, the Thibodaux, La. native continued his assault on Russ Johnson’s single-season school batting record of .410 in 1994. Zeringue finished the doubleheader 6-for-9, raising his average 12 points to a league-leading .431. He is 15-for-24 (.625) in his last five games, a streak dating back to last weekend’s series win over Kentucky.

The Commodores jumped out to a 4-0 lead in Game 2 in the first three innings.

Trailing 4-0, the Tigers cut into the deficit with a three-run frame of their own in the fifth. Nick Stavinoha and Ivan Naccarata collected consecutive singles off of starter Ryan Mullins, and both would come around to score after Will Harris’ ground out and Blake Gill’s double. J.C. Holt narrowed the deficit to 4-3, plating Gill with a RBI single.

Meier would yield to sophomore left-hander Jason Determann in the fifth. Determann allowed a run-scoring single to Aaron Garza in the sixth and later surrendered up a triple to Garza in the eighth. Garza would score on Warner Jones’ sacrifice fly to give the Commodores a 6-3 advantage.

Down to their final six outs, the Tigers erupted for three runs in the eighth to knot the game at 6-6. Liuzza singled to lead off the inning, and Zeringue drove him in on his second double of the game. Clay Harris followed with a RBI single, and Gill’s sacrifice fly tied the game at 6-6.

Vanderbilt reliever Ryan Rote (1-4) suffered the loss as he was touched for one run on four hits in 2.2 innings.