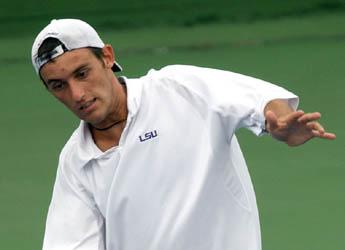 BATON ROUGE — LSU beat Southern quickly Saturday, 4-0, in the first round of the NCAA Tournament to make up for the morning’s rain-delayed start.

LSU will play tomorrow against Rice University, who defeated South Alabama in the afternoon match 4-1. The Tigers and Owls will be trying to advance to the NCAA Sweet Sixteen in Tulsa, Okla.

“We took care of business in doubles and set the tone early in singles,” said LSU head coach Jeff Brown. “Because of not knowing if it was going to rain again, we closed it out in a timely fashion and conserved our energy for tomorrow’s match.”

The No. 13-ranked Tigers (18-6) will have a tough task in the second round as they face either No. 14 Rice or South Alabama, which eliminated LSU in the first round of last year’s championship tournament.

The second round match will begin at 1 p.m. at Dub Robinson Stadium on LSU’s campus. If LSU wins, it advances to the Sweet 16 for the first time since 2001.

LSU’s doubles tandems of Bryan Fisher and Jason Hazley at the No. 1 position and Cory Ross and Sebastian Ruka at No. 2 earned wins to secure the doubles point for LSU.

Hazley beat Alejandro Galindo on singles court No. 2 and Rutka beat Christopher Williams on No. 4 to extend the Tigers’ lead.

Tickets for Sunday’s match are on sale on LSUsports.net or at the Robinson Stadium. Adult tickets are $5 and children and student tickets are $8.