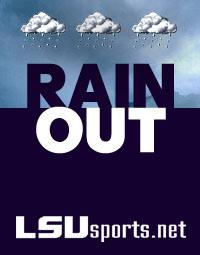 BATON ROUGE — Friday’s scheduled baseball game between LSU and Vanderbilt has been postponed due to heavy rain. The game has been re-scheduled as part of a doubleheader that will begin at 11 a.m. Saturday in Alex Box Stadium.

Fans are advised that they will need their Friday game ticket in order to be admitted to Saturday’s 11 a.m. game.

Saturday’s second game will follow approximately 30 minutes after Game 1. The stadium will be cleared at the end of the first game, and fans must present their Saturday game ticket in order to be admitted to Game 2.

Both of Saturday’s games will be nine-inning contests. A single nine-inning game is scheduled for 1 p.m. Sunday.

All three of the games can be heard on the LSU Sports Network (WDGL-FM 98.1 in Baton Rouge) and on the internet at www.LSUsports.net.

None of the three games will be televised.