Saban to Speak at College Football Hall of Fame Luncheon 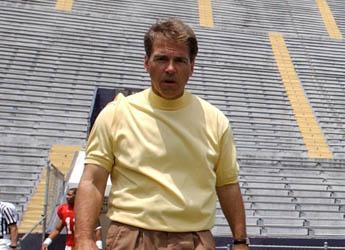 South Bend-based KeyBank is again the presenting sponsor while The South Bend Tribune and WSBT-TV are media partners.

The luncheon featuring Coach Saban will be held at South Bend’s Century Center, and is the third luncheon in the 2004 Series. On April 22, over 400 attended the season’s initial luncheon which featured former Notre Dame fullback and current Pittsburgh Steeler, Jerome Bettis. Following Bettis, new Army Head Coach Bobby Ross was the featured speaker at the May 5 luncheon.

Midway through the 2003 College Football Season, Saban assembled his LSU Tigers for a team meeting. The Tigers were ranked seventh in the BCS Standings. He told his team that now was the time to voice any frustration over the rankings, because after that, they could only talk about the next game. The players kept quiet, the Tigers kept winning and Saban’s steady leadership guided LSU to the school’s second national title with a 21-14 Sugar Bowl win over Oklahoma. Along the way, Saban won the Associated Press’ Coach of the Year Award.

Saban has used his leadership to the maximum in Baton Rouge, parlaying it into favorable results for the LSU faithful in a relatively short period. He came to LSU for the 2000 season, leaving Michigan State to take over a program full of potential but short on results. The Tigers had losing records in 8 of the previous 11 years before Saban arrived.

Under Saban, LSU has 39 wins in his four seasons, making him the first Tigers coach to post four consecutive winning campaigns since Charles McClendon (1976-79). By rebuilding the Michigan State program, taking it from NCAA probation to New Year’s Day bowl games, and by guiding LSU to its first National Championship since 1958, Saban has become a household name.

Individual tickets are on sale for $30 each while tables of eight are available for $230 for the Nick Saban Luncheon. Tickets may also be ordered for remaining luncheons in the 2004 Series. For tickets and information, please contact Special Events Coordinator Caroline Ernst at caroline.ernst@collegefootball.org or 574-235-5715 or 1-800-440-FAME or visit The College Football Hall of Fame’s website at www.collegefootball.org.