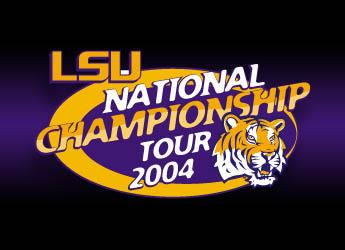 The LSU National Championship Tour gives LSU fans the opportunity to hear from Saban about LSU’s national championship season and the year ahead and from Bertman about the future of LSU Athletics. Also, Tiger Athletic Foundation CEO Ron Richard will give an update on the TAF.

The event will begin at 7:00 p.m. and will include a dinner buffet and cash bar. Also included will be silent auction items and a door prize. Doors will open at 6 p.m.

The LSU National Championship Tour, a production of the Tiger Athletic Foundation, stopped in Mandeville on April 29, Lafayette on May 4 and Shreveport/Bossier City on May 10. The tour goes to Lake Charles on July 28.

The tour is being underwritten by Cox Sports Television and Guaranty Broadcasting.

For more information on the LSU National Championship Tour, log onto www.lsutaf.org/tour/2004.