What do you do in Tuscaloosa During a Rain Delay? 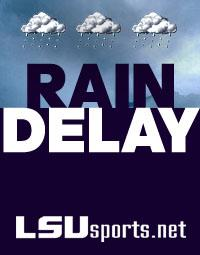 TUSCALOOSA, Ala. — Noting from a waterlogged reporter’s notebook after a rain-delayed first day of the Southeastern Conference softball tournament in Tuscaloosa:

** It seemed like LSU would never take the field Thursday for its first-round SEC game with South Carolina. But it was worth the wait for a large contingent of LSU fans who traveled here as they saw LSU get a 2-0 victory and Kristin Schmidt strike out 14 batters, tying a tournament record set by Britni Sneed two tournaments ago. The Tigers shutout an opening round SEC opponent for the sixth straight year and ran its record in tournament openers to 7-1, losing only in the inaugural edition of the event in 1997.

** Leslie Klein’s school record-breaking 13th home run was befitting of a record breaker, a majestic towering shot that cleared the center field boards. It was her first home run since April 17 and would prove to be all the Tigers needed with the way Schmidt was pitching.

** It was going to be well after midnight before LSU’s opponent would be known, but one can only wonder if 905 were in the stands for the LSU-South Carolina game, how many will be in this park for an LSU-Alabama game if the time schedule and the weather hold for Friday.

** Give it to the ground’s crew here. They have done a tremendous job keeping the infield playable without having to put a lot of drying-type material on the field … When the Georgia-Florida contest, the second game of the day originally scheduled for 1:30 p.m. finally started at 5:41 p.m. the area that was taped looked like it hadn’t had a drop of water all day.

** So what does a team that is supposed to play at 5 p.m. do all day? Well for the LSU team the morning at the Hampton Inn started just like it normally does with the morning jog and then lunch at noon. But then the afternoon began to take a bit of a twist and the team went to the Alabama indoor facility at 3 p.m. and took a long batting practice session. Then once Florida and Georgia began, it also began the final preparations that included a trip to the grocery store for some things to eat.

** Funny thing, it appeared there were more fans in the stands waiting out the rain delay Thursday then attended the tournament in Plant City, Fla.

** There is no doubt that this area knows the tournament is here. The Tuscaloosa News had a special sports section wrap around on the tournament and a long feature on the league’s attempts to draw closer to the Pac-10 as one of the premier softball conferences. The Birmingham News also had a front-page sports softball story and all the television newscasts were featuring the event prominently. Last year, even with Florida playing, it was tough to find any newspaper coverage of the event in a paper in the area surrounding Plant City.

** LSU is one of just four teams in the SEC, along with Alabama, Florida and South Carolina to appear in all eight events. Speaking of eight years of LSU softball, Ole Miss remains as the only team never to appear in the SEC Tournament, and, with the decision not to renew the contract of the Kentucky softball coach and the resignation of the softball coach at Arkansas, none of the original coaches of the teams formed in the mid-to-late 1990s are still in the league. Of course, Joyce Compton remains at South Carolina, but the Gamecocks have played softball for many years pre-dating the SEC and Compton has been a figure in Columbia for 18 years.

** Alabama’s softball complex resembles very much on a smaller scale the Hall of Fame Stadium in Oklahoma City where the women’s College World Series is played. Included in that are the replica hillsides down both foul lines, but more prominently in right field where fan overflow can sit. There was a good possibility that area may have been put to use in the night game between Auburn and Alabama but the rain delays have pushed that game so far back that it will either be very late in the evening or very early on Friday before that game even gets close to starting.

** The consensus of the media who had plenty of time during the rain delay to discuss matters like this, feel that six teams are destined for the NCAA Regionals from the SEC — LSU, Alabama, Auburn from the West, Tennessee, Georgia and Florida in the East. Mississippi State and South Carolina could benefit from the automatic bid and Mississippi State did its part by downing Tennessee, 8-2.

** It seems to get tougher and tougher for Yvette Girouard to be recognized for her coaching accomplishments and this year was no exception when it came to SEC Coach of the Year. The Weekly husband-wife duo at Tennessee, Karen and Ralph, certainly deserved the honor and probably consideration should have also gone to Tina Deese at Auburn for putting her team in contention in the West, but Girouard and her coaching staff have pulled off one of the great coaching jobs of any year. With the defections of six players, the emotional loss of her father and the little things that happened, putting a unified team on the field that believed in each other was more important than ever. The results are there in black and white for all to see. The problem when it comes to Coach of the Year voting in cases like Girouard’s is that everyone expects her to win. That’s all she’s done for two decades. The Weeklys should be congratulated for winning the award with a program that is definitely on the rise in the league. The point is it’s too bad that an impressive coaching job is taken for granted because it’s almost expected.