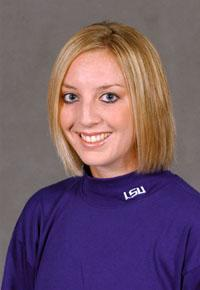 TUSCALOOSA, Ala. — For the sixth-consecutive year, the second-ranked LSU softball team opened the Southeastern Conference Tournament with a shutout, this time holding South Carolina scoreless in a 2-0 win on Thursday night at the Alabama Softball Complex.

Kristin Schmidt threw the complete-game shutout, her 12th of the season, to improve to 29-5 on the season. The senior tied the SEC Tournament single-game record with 14 strikeouts, while allowing just four hits and a walk.

After allowing three hits in the first two innings, Schmidt retired 15 of the next 17 batters. The only blemishes were a one-out fielding error by Julie Wiese in the fourth inning and a bloop infield single in the seventh.

After stranding two runners in scoring position in the first three innings, LSU got on the board in the bottom of the fourth. Leslie Klein led off with a solo home run to straight away center field. With her 13th home run of the season, she broke the Tiger single season record and gave LSU the 1-0 lead.

With two outs, Leigh Ann Danos reached on a fielding error by the shortstop. After advancing to second on a passed ball, Lauren Uhle came in to pinch run for Danos. A single to center field by Julie Wiese scored Uhle as Wiese advanced to second on the throw, extending the lead to 2-0.

“We started slow tonight,” said LSU head coach Yvette Girouard. “(Stacey) Johnson has always presented us a problem and we hadn’t played in a while, but Leslie got us started. She has been phenomenal for all season. Schmidt was in total command the whole night.”

Klein also added a single in the sixth inning to finish the game at 2-for-3, her 19th multiple-hit game of the season. Adding the run batted in from her home run gave her 53 on the season and sole possession of second place in the LSU single-season record book. She is now 10 RBIs behind Ashlee Ducote‘s record of 63 set in 2000.

Johnson started and took the loss for the Gamecocks in the circle to fall to 16-10 on the year. She allowed two runs, one earned, on six hits with a walk and four strikeouts.

With the win, the Tigers have now won their first tournament game in each of the last seven tournament appearances. LSU has also now won three straight tournament games over South Carolina, including a 5-1 win last season and a 1-0 win in the tournament championship game in 2000.

The Tigers will continue the quest for their fourth SEC Tournament title in six years as they advance to take on the winner of the Auburn-Alabama game on Friday at 7:30 p.m. Because of rain, the AU-UA game did not begin until 11:10 Thursday night.