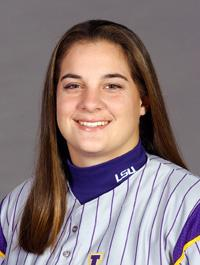 BATON ROUGE — Three members of the second-ranked LSU softball team were named to the District VI Academic All-District First Team on Thursday, as announced by the College Sports Information Directors of America.

Schmidt is a senior in political science and carries a 3.513 cumulative grade point average. The first-team All-Southeastern Conference selection will graduated this May and attend LSU Law School this fall. This is the second year she earned all-district honors, after being named to the second team last season.

A junior from Lafayette, Danos carries a 3.531 cumulative grade point average in biology. The second-team All-SEC selection plans to attend medical school following graduation. This is also her second consecutive season being named to the all-district season, after also earning second team honors in 2003.

Hill is business major that carries a team-best 3.805 cumulative grade point average. While a junior academically, she is a sophomore eligibility wise after not playing her first year at LSU. Hill also plans to attend law school following graduation next year.

All three players will now be added to the Academic All-America ballot, and the team will be announced on June 3.