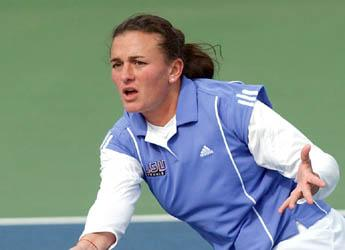 AUSTIN, Texas — The No. 19-ranked LSU women’s tennis team opens the 2004 NCAA Championship Tournament against Arizona State at 11 a.m. Saturday to try for its first postseason win since 2000.

The Lady Tigers (18-8) face No. 44 Arizona State with a full complement of healthy players for the first time since early in the season after a three-week break since their last match.

The Lady Tigers enter their 10th consecutive NCAA tournament on the heels of one of their best seasons in recent history. They won nine consecutive matches late in the season to propel them to an SEC Western Division Championship.

Arizona State is 6-14 this season, but Minnis is not taking anyone lightly.

“They play in the Pac-10 and they have a good history,” he said of the Sun Devils, who are making their 19th-conseucutive trip to the tournament. “We have to make sure we expect a very tough match.”

Seniors Rocio Fantilli, Jessica Ferguson and Bonnie White will enter their last seasons in search of their first tournament win as Lady Tigers.

Fantilli and sophomore Lauren Seaman have won their last five matches at No. 1 doubles. They will take on 57th-ranked Lauren Colallilo and Kady Pooler in the first round.

With another win, this year’s Lady Tigers will move into a tie for fourth-most wins in the program’s history.

LSU trails Arizona State, 0-4, in the all time series.

The winner advances to face the winner of No. 1 seed Texas and Texas-Arlington for a chance to advance to the Sweet 16.

Live scoring for the match will be available on LSUsports.net.

Former LSU baseball coach Paul Mainieri is among six individuals that will be honored on April 28 as “Louisiana Legends” by Friends of Louisiana Public Broadcasting.
2021 LSU Football vs. CMU Hype Video