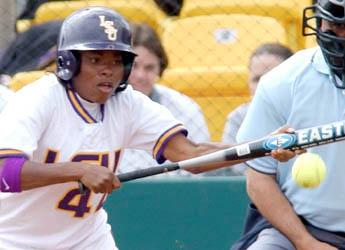 BATON ROUGE — The second-ranked LSU softball team placed eight players on the All-Southeastern Conference teams as the Tigers prepare to open SEC Tournament play on Thursday at 5 p.m. against South Carolina at the Alabama Softball Complex.

For Schmidt the All-SEC honor is the third of her career, after being named to the second team the previous two seasons. The Houston native sports a 28-5 record in the circle with 255 strikeouts and a 1.41 earned run average.

Hughes is batting .380 on the year and leads the team in hits with 73 and stolen bases with 27. Klein hits at a .348 clip on the year and tied the LSU single season home run record with 12. The honor is the first for both players, as Klein becomes just the fourth player in Tiger history to earn first team All-SEC honors as a freshman.

Danos, Delahoussaye, Wiese and Castle also receiving All-SEC honors for the first time in their careers. Danos is hitting .326 on the season with three home runs, while Delahoussaye is batting .325 with nine homers. A four-year letterwinner, Wiese is hitting at a .290 clip with seven home runs. In her first season as a Tiger, Castle leads the team with a .390 average and has knocked four home runs.

Turner boasts a 17-4 record in the circle this season with 101 strikeouts and a 1.67 earned run average. In addition, the freshman boasts wins over three nationally ranked teams, including a pair of top 10 teams.

The SEC regular season champion Tigers (46-9) open play in the league tournament against South Carolina in the third game on Thursday. LSU took 2-of-3 from the Gamecocks during the regular season at Tiger Park.

“We have a series of goals this year and we have accomplished two of those, winning the SEC Western Division and the SEC regular season title,” said LSU head coach Yvette Girouard. “Winning the SEC Tournament is the next step on our list of goals that we want to achieve.

“There are no more easy games. We are now taking on the best in the league and we know that we will have to play our best to win.”

All of the tournament games will be broadcast on the LSU Sports Network in Baton Rouge on 107.3 FM and on the internet at www.LSUsports.net.

Tournament play will continue on Saturday before concluding with the championship game on Sunday at 12:30 p.m. The game will be televised on Fox Sports Net in Baton Rouge on cable channel 38.