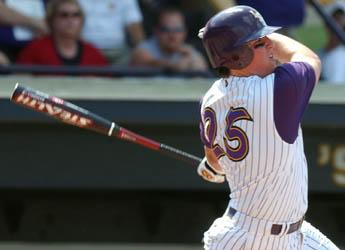 Twelve of the 21 hits came in the final three innings, frames that included a five-run seventh and a six-run ninth, while seven of the nine starters collected at least two hits apiece.

Meanwhile, Nate Bumstead (8-2) was marvelous for the second week in a row, allowing two runs on five hits in 6.1 innings. The senior right-hander fanned a season-high seven and walked none en route to his eighth win on the year.

LSU jumped out to a 2-0 lead for the second-consecutive day by capitalizing on a pair of pass balls that plated Blake Gill. Ivan Naccarata added a RBI single off of UK starter Andy Myette (1-2), scoring Zeringue.

While Myette found trouble early, Bumstead settled in between the second and sixth innings, retiring 14 batters at one point.

After surrendering a two-out single to Caleb Stewart in the first, Bumstead retired the sides in order before giving up a single to Joe Naill in the sixth. Naill was eventually erased as Bumstead struck out the next two batters to fan the side.

The Tigers tacked on two more in the fifth, ignited again by the tandem of Harris and Zeringue. Harris doubled to leadoff the inning and then scored on Zeringue’s RBI single. Clay Harris made it a 4-0 advantage with a RBI single of his own.

Gill delivered again in the seventh by blasting his third homer of the season, a two-run shot over the right field wall. RBI singles by Naccarata and Will Harris and a run-scoring double by Nick Stavinoha capped the five-run, seven-hit barrage.

Harris, who entered Sunday’s contest 0-for-8 in the series, collected his fourth hit of the day in the ninth on a towering two-run homer over the left-center field wall.

“I came out Friday and Saturday kind of flat,” said the Slidell native. “You just have to keep swinging so you don’t lose your place in the lineup. I think I focused a little more today.”

The final three Tiger runs came courtesy of a pair of pinch hitters. Ty Jensen singled through the right side, while Bobby DiLiberto — in just his 11th appearance of the year — unloaded on UK reliever Mark Galvin’s offering for his second homer of the season.

Sophomore lefty Greg Smith came on to work the ninth and surrendered two runs with two outs before retiring Bertram to end the game.