Chatman Named Coach of the Year by Black Coaches Association 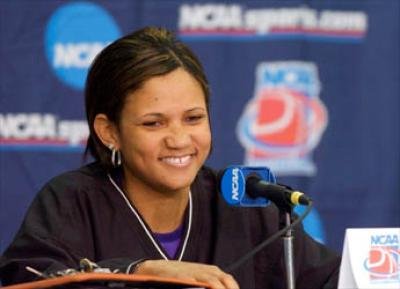 INDIANAPOLIS — Pokey Chatman, recently named head coach of LSU’s Lady Tigers basketball team, was named the Female Coach of the Year by the Black Coaches Association for the 2003-04 season, it was announced by the organization over the weekend.

“It is truly an honor to be recognized by the Black Coaches Association,” Chatman said. “In all honesty, I feel like this is an award I can share with coach Gunter. Without her preparation I could not have excelled under such adverse conditions.”

Chatman helped lead the Lady Tigers to the program’s first NCAA Final Four and guided LSU to a 7-4 record as acting head coach this past season. Chatman, a 17-year veteran of the Lady Tigers program, filled in for former head coach Sue Gunter who missed much of the season with an illness.

Chatman earned Kodak All-American honors in 1991 to cap a stellar four-year playing career at LSU and then was a part of the coaching staff for the past 13 seasons, including the last five as associate coach.

The recipients of the annual awards, including Male Coach of the Year Paul Hewitt of Georgia Tech, will be honored at the annual BCA Awards Banquet on June 5 in Indianapolis.