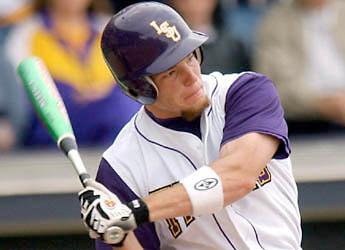 The teams meet in the series finale at Noon CDT Sunday in a game televised by the Jumbo Sports Network (Cable Ch. 6 in Baton Rouge). Right-hander Nate Bumstead (7-2, 3.94 ERA) is scheduled to start for LSU, while Kentucky’s starter has yet to be determined.

LSU will attempt on Sunday to win an SEC series for the fifth time after losing the opening game of the weekend.

Catcher Matt Liuzza lifted a sacrifice fly to center, scoring Harris to give LSU a 9-8 lead. Stavinoha then launched a two-run blast — his sixth homer of the season — to left-center field to extend the lead to 11-8.

Faircloth, who surrendered a bases-loaded, game-tying double to Kentucky DH Mike Breyman with no outs in the bottom of the seventh, silenced the UK batters the rest of the way to earn the victory.

After giving up the double to Breyman — the first batter he faced in relief of Justin Meier — Faircloth (2-3) retired eight straight Wildcat hitters before Breyman single with two outs in the ninth. Faircloth struck out third baseman Jake Kungl to end the game.

Faircloth finished with three shutout innings, allowing two hits with no walks and one strikeout.

Rodriguez (2-5) was charged with the loss as he surrendered three runs on five hits in 3.2 innings with one walk and three strikeouts.

Kentucky battled back against Meier, scoring two runs in the second before narrowing the gap to 6-5 in the third on right fielder Billy Grace’s three-run homer, his second this season.

Center fielder J.C. Holt’s two-run single in the fifth against reliever Adam Kunkel gave the Tigers an 8-5 lead, but Kentucky tied the game in the seventh on Breyman’s three-run double.

Meier, who worked six innings before yielding to Faircloth, was charged with eight runs on seven hits with three walks and four strikeouts.