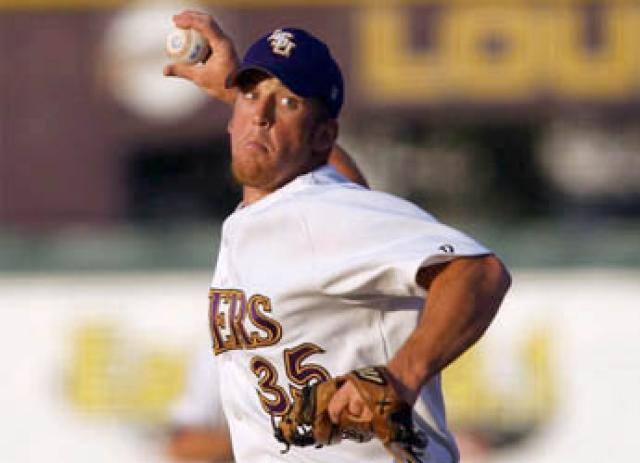 The teams meet in Game 2 of the series at 1 p.m. CDT Saturday.

Left-hander Craig Snipp (2-6) turned in his best outing of the year, limiting LSU — the SEC’s top hitting team — to two runs on six hits in 5.1 innings with one walk and four strikeouts.

The Wildcats opened the scoring against LSU starter Clay Dirks in the third inning when center fielder John Shelby singled, advanced to third on a throwing error by LSU catcher Matt Liuzza and scored on shortstop Joe Naill’s single.

Dirks (8-2), who was lifted for reliever Jason Determann in the fourth, was charged with four runs (three earned) on five hits with one walk and one strikeout.

LSU cut the deficit to 4-2 in the sixth as third baseman Clay Harris lined an RBI double and second baseman Ivan Naccarata drove home a run with a single.

Tennyson entered the game after Naccarata’s one-out single, and after giving up a single to DH Nick Stavinoha, he got first baseman Will Harris to ground into a double play to end the threat.

Kentucky put the game out of reach with three-run homers in consecutive innings, extending its lead to 10-2. Left fielder Caleb Stewart launched his ninth homer of the year in the seventh, and Naill homered for the first time this season in the eighth.

Stavinoha singled in a run in the ninth to account for the final margin.

Tennyson earned credit for his first save this season, as he limited the Tigers to one run on three hits in 3.2 innings with one walk and one strikeout.

Right-hander Justin Meier (5-2, 3.23 ERA) is scheduled to start for LSU Saturday, while Kentucky will counter with right-hander Seth Stanley (5-1, 5.59 ERA).