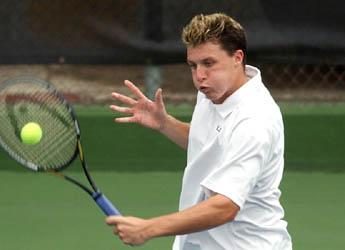 INDIANAPOLIS, Ind. — Ken Skupski and the doubles team of Bryan Fisher and Jason Hazley will represent LSU at this year’s NCAA Individual Singles and Doubles Championships.

Play in the individual tournaments begins May 26 in Tulsa, Okla., after the team championships are completed.

Skupski, a freshman from Liverpool, England, is currently ranked No. 30 in the nation in singles. He is one of only two freshmen in the bracket.

Fisher, a senior from Nashville, Tenn., and Hazley, a junior from Bradenton, Fla., compete in the doubles tournament for the second consecutive year. The duo is currently ranked No. 13 in the nation.

Skupski, ranked No. 30, beat 11 nationally-ranked opponents this season. He was recently named to the first-team All-SEC.

Fisher and Hazley have been ranked for the entire season. They were named second-team All-SEC.

Fisher, Hazley and Skupski will first see action in Baton Rouge as the No. 14-seed Tigers play host to the first two rounds of the team championships on May 14-15. For updated tournament information, check LSUsports.net.