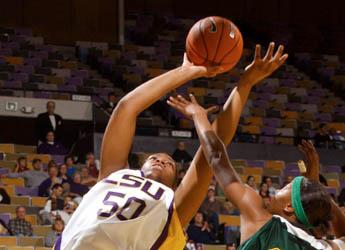 BATON ROUGE — Treynell Clavelle, a 6-3 center, and Amber Long, a 5-6 guard, both members of the 2004 LSU Lady Tigers Final Four basketball team, have decided to transfer from LSU and continue their careers elsewhere, it was announced by head coach Pokey Chatman on Thursday.

Clavelle, a sophomore this past season, averaged 3.7 points and 3.3 rebounds in 10 minutes per game. She scored a career high 11 points in LSU’s victory over No. 1 seed Texas in the NCAA regional semifinal and contributed a career-best nine rebounds in the Southeastern Conference Tournament second-round victory over Ole Miss.

“It is difficult to part ways with a player the caliber of Treynell,” Chatman said. “She made significant contributions when called upon. Her performance in the Sweet Sixteen against Texas comes to mind. Anytime you have someone that can score 11 points off the bench on that stage, you hate to lose them.”

Clavelle, a Jeanerette, La., native, will enroll at Louisiana-Lafayette and be eligible to play in the 2005-06 season as a junior. The Ragin’ Cajuns finished 13-15 overall this past season and finished second in the Sun Belt Conference’s West division.

“I really enjoyed my experience at LSU,” Clavelle said. “I will miss everyone especially my teammates, but I think ULL is a better fit for me right now.”

Clavelle, who has decided to major in nursing, has a sister enrolled at ULL in nursing school.

“Treynell is a great kid. I believe with her experience and ability she can be more of an impact player at ULL,” Chatman added.

Long, a Irmo, S.C. native, averaged 1.4 points per game in a limited role for the Lady Tigers as a freshman this past season.

“Amber worked very hard this year, but given our great depth at the perimeter her opportunity to play was limited,” Chatman said. “As she continues to work and realize her full potential I think she will have a productive career wherever she decides to go.”

“Being at LSU was good for me as player and person,” Long said. “But I’m looking for another opportunity somewhere else.”