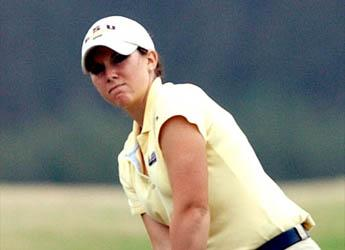 HOWEY-IN-THE-HILLS, Fla. — The youthful quintet of LSU Lady Tiger golfers proved they could play with the best in the Southeastern Conference three weeks ago in Baton Rouge.

Now the Lady Tiger’s “Young Guns” lineup tries to compete with some of the top teams in the NCAA here at the Mission Inn Resort about 30 minutes outside Orlando, Fla., in the NCAA East Women’s Golf Regional, which begins Thursday.

But being near the Orlando attractions means very little. This is no vacation for Karen Bahnsen and her team or the other 21 teams gathered for the three-day, 54-hole stroke-play competition. The top eight teams in this and the Central (Bloomington, Ill.) and West (Stanford, Calif.) Regionals will advance to the NCAA Division I Women’s Golf Championships in Opelika, Ala., May 18-21. Also advancing from each regional will be the top two individual competitors who are not members of the top eight advancing teams.

LSU is coming off a tie for second place in the SEC championships at the University Club when LSU posted a 54-hole total of 17-over par, the fifth lowest score in school history. The Lady Tigers, 22nd in the Golfstat rankings and 25th in the GolfWeek/Sagarin performance rankings, were tied with Auburn, also one of the higher seeds in the East Regional. SEC winner Vanderbilt will take part in the Central Regional.

Top-ranked Duke is the heavy favorite to win the tournament, the only tournament of the golf season where there is no trophy only an information packet to the top eight teams about the national tournament. In all, 12 of the top 28 teams in the Sagarin rankings are at this resort to tackle to El Campeon course — No. 1 Duke, No. 9 Auburn, No. 11 Oklahoma State, No. 13 Florida, No. 14 Wake Forest, No. 17 UNLV, No. 18 Tulane, No. 20 North Carolina, No. 22 Tennessee, No. 24 Furman, No. 25 LSU, and, No. 28 South Carolina.

Southern is in the field as an automatic qualifier after winning the Southwestern Athletic Conference title for the second straight year.

LSU will keep its lineup for the regional that it used successfully in the SECs: junior Brooke Shelton of Plano, Texas, sophomore Vicky Meyer of Brazil and the three freshmen — Alexis Rather (Tupelo, Miss.) and twins Melissa and Nicola Eaton (South Africa).

Shelton comes in with the lowest stroke average for the nine-tournament season at 75.92 with Meyer at 76.23. Meyer has been the hottest golfer in the spring with a 75.60 stroke average, but Shelton followed an opening round 80 in the SECs with back-to-back 71s. Four LSU golfers finished between 11th and 20th in the final SEC standings.