Tigers Ranked Preseason No. 1 by ESPN.com 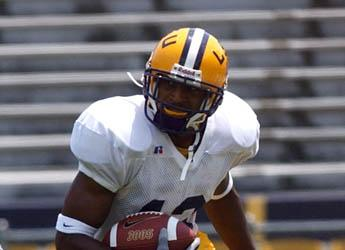 BATON ROUGE — LSU’s first football game for the 2004 season is still four months away, but the Tigers have already climbed to No. 1 in the nation in a preseason poll released by ESPN.com on Wednesday.

The poll, which will stay intact until August, is a reflection of how productive a team’s spring practice was, while also considering which players are returning from the 2003 season.

The Tigers are followed in the poll by Southern Cal at No. 2, Georgia at No. 3, Oklahoma at No.4 and Michigan at No. 5. Texas, Miami (Fla.), Florida State, Maryland, and Utah round out the top 10.

Other Southeastern Conference teams in the ESPN.com Top 25 include Tennessee at No. 14, Auburn at No. 16, and Florida at No. 18.

LSU, winners of the BCS national title in 2003, returns 15 starters and 41 letterwinners from last year’s 13-1 squad. Headlining the list of returnees for the Tigers include 2003 All-Americas in cornerback Corey Webster and return specialist/wide receiver Skyler Green.