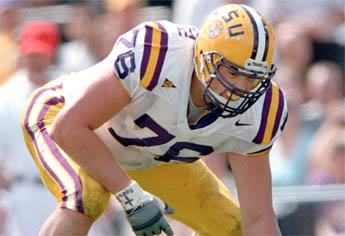 BATON ROUGE — LSU coach Nick Saban, along with three members from the Tigers’ 2003 national championship team, have been tabbed as 2004 Playboy All-Americas, the magazine announced.

Saban, who has been named the 2004 Coach of the Year by Playboy Magazine, is joined on the squad by senior defensive end Marcus Spears, senior cornerback Corey Webster and junior offensive tackle Andrew Whitworth.

Spears, a Baton Rouge native, earned First Team All-SEC honors last year in helping the Tigers rank first in the nation in scoring defense and total defense. Spears finished the 2003 season with 49 tackles, including 13.5 for losses and six sacks.

Webster, from Vacherie, La., ranks second in LSU history with 14 career interceptions in just two years of action on the defensive side of the football. Webster earned First Team All-SEC honors last year as well as being a First Team All-America pick by the American Football Coach Association.

Whitworth will anchor the Tiger offensive line in 2004 as he enters his junior season having started 27 consecutive games for LSU. The West Monroe, La., native led all Tigers in total plays last year with 1,008. In 920 plays on offense in 2003, Whitworth allowed only five sacks and was called for just seven penalties.

Saban along with the three players will travel to Phoenix, Ariz., this weekend for a photo shoot with the rest of the 2004 Playboy All-America team. The team will appear in Playboy’s 2004 College Football Preview, which will hit the newsstands later this summer.