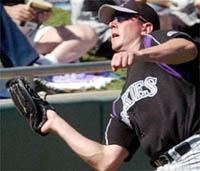 By Owen Perkins / Special to MLB.com

DENVER — The Rockies gave their fans plenty to twist and shout about Saturday night, offering more than enough bang for their buck in the second game of Saturday’s doubleheader, battling the Braves in a back-and-forth contest that kept the tension even higher than the score.

It was an evening of oddities, with strange calls, stranger fans, an ejection, a pair of exploding bats, a two-decision day for one Rockies pitcher and a brush with a cycle for a rookie slugger in an 11-7 loss to the Braves in the nightcap.

The Braves drew first blood when Dewayne Wise led off the first inning with a triple into right field. Mark DeRosa followed with a double to right, and advanced on a wild pitch, scoring on a sacrifice fly to right from Marcus Giles.

The Rockies retaliated in the bottom of the frame, putting together a picture-perfect run-scoring rally. Aaron Miles opened the inning with a single to right, advancing on Royce Clayton’s sacrifice. Todd Helton was walked, and Vinny Castilla lined out to short, but Jeromy Burnitz and Matt Holliday knocked in a pair of run-scoring singles to right to even the score.

Rockies starter Scott Elarton continued to make progress as he tried to solidify his spot in the rotation, facing 13 batters without yielding a hit after the leadoff triple and double in the first inning. The fifth inning proved problematic, however, when with runners on first and second and one out, he served up a fat fastball that Braves pitcher John Thomson drilled to right for a two-run, go-ahead double.

“I’d like to have one pitch back,” Elarton said of the Thomson mistake. “Other than that I thought I threw the ball well. I knew there was a chance he’d still be bunting, but I wanted to throw a fastball up in the zone instead of right down the middle. Either he fouls off the bunt if he’s bunting or swings through a fastball upstairs.”

As disappointing as the game was from a pitching perspective, the Rockies continued their parade of over-achieving rookies, introducing Brad Hawpe to Coors Field with a pinch-hit single in the first game and with his second, third and fourth hits of his big league career in his third, fourth and fifth at-bats. In his second at-bat against Thomson, Hawpe hit a hard grounder at first baseman Adam LaRoche. The ball bounced over LaRoche’s head and traveled into the right-field corner as Hawpe traveled around the bases, ending his journey at third base for a triple.

Hawpe was far from finished, unloading a sixth inning offering from Thomson into the left-field seats for his debut dinger. He was almost as fast in his home run trot as he’d been legging out the triple.

When he connected for a single to center in the eighth, Hawpe was a lone double short of the cycle.

“You only get one chance to make a first impression,” Hurdle noted after the game. “He made a pretty good impression on a lot of people today.”

J.D. Drew made a different kind of impression, stirring things up with a foul ball into the first row of seats beyond the third-base dugout to lead off the sixth inning. Castilla got to the ball and made the catch, leaning into the stands, but when a Rockies fan inexplicably grabbed the ball out of Castilla’s glove, umpire Tim Timmons ruled the ball out of play, much to the surprise of Castilla and 24,271 other fans at Coors Field.

It was Rockies cap giveaway night, and the fan’s souvenir cap ended up in Castilla’s glove, perhaps leading the umpire to rule that the ball had first hit the cap, making it a dead ball. Colorado manager Clint Hurdle took exception to the call, and Timmons in turn took exception to Hurdle’s method of complaint, ejecting the manager from the game.

Drew ended up walking, and a double play took away some of the sting. But the real satisfaction came in the bottom of the seventh, when Vinny took his vengeance out on the ball, sending it 427 feet into the left-field bleachers to put the Rockies ahead by two.

It was initiation by fire for the new era of Rockies baseball, complete with their four-man rotation and octopus-like, eight-armed bullpen. The rock-solid relief corps was put to the test, with five pitchers getting the call in the nightcap, including the winning pitcher from the opening game, Vladimir Nunez, making his second appearance of the day in the top of the eighth inning. Nunez faced six hitters in search of the inning’s final out, letting six runs cross the plate and giving the lead back to the Braves.

It turned out to be a win-some-lose-some day for Nunez, who made the unenviable accomplishment of earning both a win and a loss in the span of five hours, not entirely the kind of efficiency the Rockies are looking for in the bullpen.

With Hurdle out of the game, bench coach Jamie Quirk had something of a Grady Little moment with Nunez on the mound, watching his ineffective efforts while a well-rested Turk Wendell waited in the bullpen, along with Shawn Chacon, unavailable after pitching in the opener, and Brian Fuentes, who hadn’t pitched since throwing two innings Wednesday.

The Rockies threatened in the eighth, when Mark Sweeney stroked his 100th pinch-hit, but the rally fizzled when Aaron Miles’ hard shot to first was snared by DeRosa, who trotted to the bag for the inning’s final out.

By the bottom of the ninth, Braves manager Bobby Cox had had enough, bringing in closer John Smoltz despite the four-run lead. The sure-handed Smoltz gloved Royce Clayton’s leadoff drive, ending his twelve-game hitting streak.

Helton and Castilla singled and doubled before Smoltz froze Holliday with a 96 mph fastball, ending the game and leaving Hawpe stranded in the on-deck circle, all too emblematic of the Rockies’ hopes for the future.