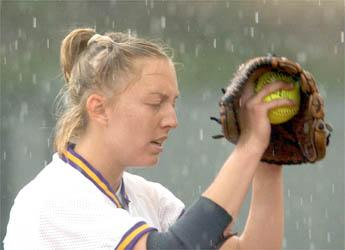 BATON ROUGE — After posting a 2-0 record to help the nationally ranked LSU softball team clinch its fifth Southeastern Conference title last weekend, All-American Kristin Schmidt was named the SEC Pitcher of the Week, as announced by the league office on Monday.

The senior from Houston notched a 0.00 earned run average in 12.0 inning pitched, allowing just one unearned run in a pair of wins over No. 20 Florida, her 10th and 11th wins over nationally ranked teams this season. The pair of victories moved her into 21st position in NCAA history in career wins with 106.

With the win in game one, the Tigers clinched their fifth SEC Championship in the last six seasons. In addition, the complete-game shutout of the Gators in game one was her 10th of the season, moving her into fourth place in single season shutouts in LSU history and third in career shutouts in SEC history.

For the week, she struck out 15 batters for an 8.75 strikeout ratio. She now has 1,047 strikeouts for her career, moving her into 18th place in NCAA career strikeout history.

This is the third SEC Pitcher of the Week honor for Schmidt this season, the second most of any pitcher in the league, and the fourth conference honor for LSU this year.