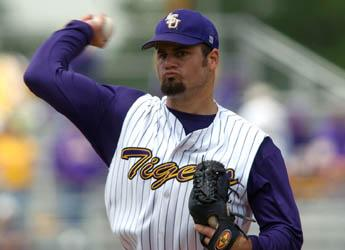 BATON ROUGE — Sixth-ranked LSU completed a doubleheader sweep of Alabama with scores of 2-1 and 9-2 to capture their third consecutive Southeastern Conference series on an unseasonably cool Sunday at Alex Box Stadium.

The Tigers (34-12, 12-9) moved into a second-place tie with Ole Miss in the SEC Western Division after the Rebels’ series loss to South Carolina.

Nick Stavinoha’s two-out, RBI single in the bottom of the eighth inning lifted LSU past Alabama, 2-1, in the first game of the doubleheader.

Jon Zeringue walked to start the inning and advanced to second on Clay Harris’ sacrifice bunt. He moved over to third on Ivan Naccarata’s groundout before touching home on Stavinoha’s opposite field single off of Alabama reliever Seth Johnson.

“I was just trying to put it in play,” said Stavinoha, who finished game one 2-for-4. “I felt pretty good at the plate today, a little more direct. We kept our composure and our pitchers did a tremendous job.”

Jason Determann (3-3) recorded the win in relief of Justin Meier. Meier was very effective, surrendering one run while scattering eight hits in 7.1 innings.

“Meier made key pitches when he had to,” said LSU head coach Smoke Laval. “He kept his juices going and got several key outs.”

Determann inherited a two-out, two-on jam in the top of the eighth with the go-ahead run represented by leadoff hitter Mark Haske. After surrendering a walk to Zac Welch to load the bases, the sophomore southpaw induced a fielder’s choice ground ball from Michael McCallister to erase the threat.

Stavinoha nearly gave the Tigers a lead in the sixth, drilling a two-out double off of the right field wall with Naccarata occupying first base. McCallister fired the ball into the infield, forcing Naccarata to hold at third. Will Harris then grounded out to third baseman Evan Bush, stranding the go-ahead run at third.

Alabama was led at the plate by Gabe Scott, who collected two of the Tide’s eight hits. Meanwhile, LSU was held to four hits, tying its lowest output of the season. Auburn and Tulane limited the Tigers to four hits in back-to-back games on April 4 and 6.

LSU erupted for nine runs on 11 hits against five Alabama pitchers to complete a doubleheader sweep of the Tide, 9-2, in Game 2.

“I was fired up after watching that big win in the first game,” said Bumstead. “You want the ball in a situation like that.”

He was helped defensively by three double plays that came in several key situations.

“Defensively, we were a little bit better,” said LSU coach Smoke Laval. “We made a big step, pitching-wise today. We’ll see if we can keep this going into next weekend.”

Clay Harris drove in the Tigers’ first two runs of the game on RBI singles coming in the first and third innings. Nick Stavinoha made it a 3-1 contest on his third-inning RBI single.

Shortstop Blake Gill launched a solo homer to highlight a two-run fourth, before LSU put the game out of reach with a four-run sixth highlighted by Ryan Patterson’s RBI double.

Three of the four runs in the sixth were unearned as the Tigers’ capitalized on shortstop Greg Paiml’s error. Jon Zeringue closed out the scoring, coming home on Matt Downs’ wild pitch.

Bumstead allowed a run in the seventh on Matt Grooms’ RBI single, but fanned pinch-hitter Ryan Beagle to close out the game.