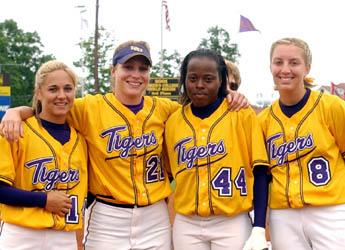 BATON ROUGE — The Southeastern Conference Champion LSU softball team closed out the regular season with a doubleheader split against No. 20 Florida, winning game one 4-1 before falling in game two 3-1 on Sunday afternoon at Tiger Park.

With the split, the Tigers (46-9, 22-6 SEC) also closed out play at home. Between the two games of the doubleheader, LSU honored it four seniors – Sara Fitzgerald, LaDonia Hughes, Kristin Schmidt and Julie Wiese – presenting each with a framed photo and flowers during a brief ceremony. The Gators moved to 40-16 on the year and 16-13 in league play.

In the first game, the Tigers used a two-RBI single by Hughes as part of a three-run fourth inning. Florida scored just one unearned run in the top of the sixth inning as LSU took the win.

“That was disappointing for us in game two, obviously, after facing the same pitcher we saw in game one,” said LSU head coach Yvette Girouard. Although she is a nice talent, we didn’t make things happen. It’s not the way I would have liked to have left the park today, but I don’t want that to overshadow the fact that we are the SEC Champions and we did win the first game today.”

“It was an emotional day for the seniors, but not that it’s an excuse,” said Girouard. “We didn’t make anything happen offensively. I think that winning the SEC Championship this season for the seniors was a reprieve because they were a part of a team that didn’t put up any boards on the wall last season. I know that they are very happy about winning and rightly so because this is an extremely difficult league. This is a club that didn’t get any votes for the league championship in the preseason.”

Schmidt started and earned the complete-game win for the Tigers in game one to improve to 28-5 on the season. She allowed one unearned run on four hits with a walk and eight strikeouts.

LSU struck first with one run in the bottom of the first inning. With one out, Lauren Castle drew a walk. A double to left center by Leslie Klein scored Castle from first to put the Tigers on the board.

In the bottom of the fourth LSU added three more. With one out, Lauren Delahoussaye took a four-ball walk. With two outs, Leigh Ann Danos singled down the right field line, moving Delahoussaye to third.

After Lauren Uhle came in to pinch run for Danos, Fitzgerald recorded an infield single that scored Delahoussaye and sent Uhle to second. A walk by Camille Harris loaded the bases. Hughes then singled up the middle, scoring Uhle and Fitzgerald to extend the Tiger lead to 4-0.

Florida broke up the shutout in the top of the sixth. Jenilee Garner singled up the middle to lead off the inning. On a bunt single by Shelley Stevens, Stephanie Hill threw the ball away, allowing Garner to score from first. Schmidt then retired the final six Gator batters in order to end the game.

In game two, Florida struck first with a run in the top of the second inning. With one out, Lauren Rousell singled to center field. After Nikki Baldwin came in to pinch run for Rousell, she moved to second on a ground out by Mylin Prieto. Baldwin scored on a single to center field by Michelle Diaz.

The Gators extended their lead to 3-0 in the top of the sixth. With one out, Garner recorded an in infield single and advanced to second on an error by Delahoussaye. On an infield single by Shelley Stevens, Garner moved to third. After Garner stole second, a single to center field by Butler scored Garner and Stevens.

Stephanie Hill then singled to left field, moving to Castle to third. After Uhle came in to run for Hill at first, she moved to second on an infield groundout by Delahoussaye. With the tying runs in scoring position, however, a fly ball to right field by Wiese was caught for the third out to end the inning.

In the bottom of the seventh inning, LSU once again mounted a rally. Leigh Ann Danos, pinch hitting for Kristen Hobbs, singled up the middle to lead off the inning. After Hobbs reentered at first, Fitzgerald singled up the middle, moving Hobbs to second. A fielder’s choice by Harris caught Hobbs going to third, but sent Fitzgerald to second. On an infield groundout by Hughes, Harris moved to second and Fitzgerald moved to third. But with the tying runs once again in scoring position, Castle struck out to end the game.

Stacey Stevens pitched both games for Florida, taking the loss in game one and earning the win in game two, to move to 14-7 on the year. In game one, she allowed four runs on five hits with five walks and five strikeouts. In the second game, she allowed one run on seven hits with a walk and two strikeouts.

LSU will be the No. 1 seed in the SEC Tournament, which begins in Tuscaloosa, Ala., on Thursday, May 13. The Tigers will take on eighth-seeded South Carolina at 5 p.m. LSU took 2-of-3 against the Gamecocks in Baton Rouge during the regular season. If the Tigers win their first game, they will take on the winner of fourth-seeded Auburn and fifth-seeded Alabama on Friday at 7:30 p.m.