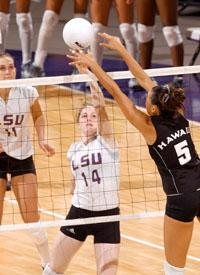 BATON ROUGE — The LSU volleyball team will be looking to avenge a five-game loss to Ole Miss when the Lady Rebels visit on Sunday at 1:30 p.m. in the Maravich Center for the Tigers’ 2003 home finale.

“This is a big match for us,” said LSU head coach Fran Flory. “We were disappointed in our loss on Friday and we need to try and get back on the winning track. Ole Miss is coming in here with its back against they wall. They will be looking for a win to keep their hopes alive for earning an SEC Tournament berth. We can not overlook this team because they defeated us at their place last month.”

In an earlier meeting in Oxford, Miss., Ole Miss defeated LSU in five games, snapping the Tigers’ four-match winning streak over the Lady Rebels. The last two meetings between these squads have gone five games, with LSU winning, 3-2, in Oxford in 2002.

Junior Regan Hood, who recorded the first triple double in two years on Friday against Mississippi State, led the Tigers in the previous meeting with Ole Miss. The team leader in kills per game recorded 21 kills, while hitting at a .395 clip. She also recorded seven digs and four blocks.

Freshman Lauren Leaumont added 19 kills for LSU, including eight in the fourth game, while freshman Melody Clark and Markeisha Constant each added 10 kills.

The Tigers will be on the road the remainder of the regular season. LSU will travel to take on Georgia in Athens, Ga., next Friday at 7 p.m. ET before traveling to Gainesville, Fla., to take on No. 3 Florida on Sunday at 1:30 p.m. ET.