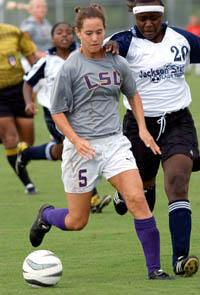 BATON ROUGE — The LSU soccer team will complete its 2003 season on Sunday when the Tigers face cross-town rival Southern University at the LSU Soccer Complex at 2 p.m.

LSU will honor its six seniors on “Senior Day” and will also go for their second-straight winning season and third in four years. The Tigers last posted consecutive winning seasons in 1995-96. LSU (9-9-1, 2-7 Southeastern Conference) lost a tough 3-2 match to Arkansas on Friday night in Fayetteville, Ark., the Tigers’ final conference match of the season.

“This is a big match for our team because it is the final one of the season and we have to win to have a winning season,” said LSU head coach George Fotopoulos. “We lost a tough match on Friday but we need to forget about that because this is a special day for our seniors,” said Fotopoulos.

Freshman forward Stacy Bishop scored her 11th goal of the season and fellow freshman Julie Neumann recorded the first goal of her career in Friday’s loss to Arkansas. Junior forward Artie Brown enters Sunday’s match with a team-leading 12 goals and is second on the team with 26 points. Bishop leads the Tigers with 28 points. Brown is two goals away from tying former teammate Mandy Heintz for second place in school history. The Baton Rouge native has 25 goals in her career.

The Tigers will face Southern for the first time in school history. LSU owns a 17-1-2 mark versus in-state competition since Fotopoulos’ arrival in 2000.

LSU’s senior class- Rachel Cohen, Jenn deHay, Kasey Dexter, Stephanie Keating, Laura Klatter, and Elizabeth Marschall will be honored in a ceremony following the match. The 2003 senior class, Fotopoulos’ first LSU team, have won 52 games in their careers, and made it to two SEC Tournaments, as well as winning a school-record 15 games in 2000.