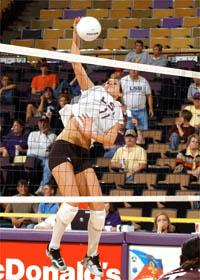 With the loss, the Tigers fell to 10-14 overall and 5-6 in Southeastern Conference play. The win moves the Bulldogs to 2-19 on the season and 1-19 in league play.

“I am disappointed in the way we played tonight,” said LSU head coach Fran Flory. “I was proud of the way we fought back after being down two games, but we put ourselves in such a hole that we just could not get out. Give credit to Mississippi State for playing a good match, but we did not execute when we needed to and did not take advantage of the opportunities that we were given.”

Junior Regan Hood recorded the first triple-double at LSU since Meagan Davis against Ole Miss on Oct. 19, 2001. The Carrollton, Texas native recorded 24 kills with 18 digs and a career-high 10 blocks, while hitting at a .365 clip for the Tigers. In both games one and four, the middle blocker recorded four blocks, while hitting .625 in the third game.

Juniors Beth Cowley and Rachel Pittman each recorded double-figures in digs with 12 and 10 respectively. Cowley also recorded a double-double with 36 assists. Freshman Lacey Galliano recorded a career-high with five blocks for the Tigers.

The first game remained close until late. With the score tied at 19, the Bulldogs went on a 5-0 run to pull ahead, 24-19. LSU was able to cut it back to 27-26, but Mississippi State scored the final three points of the match to take the one game advantage, 30-26.

The story was much the same in the second game. Tied at 24, MSU went on a 3-0 run that the Tigers could not overcome. LSU once again got it back to 27-26, before the Bulldogs sent it to game point, 29-26. The Tigers got one back before MSU closed out the game, 30-27, and took the two-game advantage into the locker room.

In the third game, it was LSU that used a late run to win the game. With the score tied at 22, the Tigers went on a 7-1 run to send it to game point, 29-23. The Bulldogs fought off game point twice before a kill by Leaumont gave LSU the game, 30-25.

The Tigers took the advantage much earlier in game four and never relinquished it. With the score tied at 13, LSU went on a 6-2 run to jump out to the 19-15 lead. Mississippi State would get no closer the four the remainder of the way as the Tigers tied the match at two games all, 30-24.

In the fifth game, the Bulldogs jumped out early with a 6-1 lead. LSU fought back, getting as close as 8-5, but could get no closer. Mississippi State did not commit an error in the game, hitting .611 with 11 kills on 18 chances. Despite six kills by Hood, the Tigers were blocked back three times as the Bulldogs took the game and the match, 15-10.

LSU returns to action against Ole Miss on Sunday at 1:30 p.m. It will be the final home match of the 2003 season for the Tigers, who will play their last four regular-season matches on the road. LSU lost to the Lady Rebels in five games in Oxford, Miss., earlier this season.