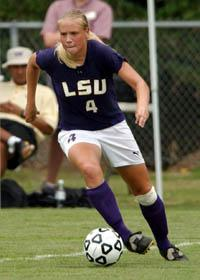 FAYETTEVILLE, Ark. — The LSU soccer team fell to the Arkansas Lady’Backs in its final conference match of the season, 3-2, on Friday night at Lady’back Field on the Lady’Backs’ Senior Night”.

“I am proud of our team for playing hard for the entire game because every time they (Arkansas) scored a goal we came back and answered, but were just not able to do it in the end,” said LSU head coach George Fotopoulos.

The two teams, which combined for five goals in the first 45 minutes, failed to score in the second period. LSU dropped to 9-9-1 overall and finished the season 2-7 in Southeastern Conference play. The Tigers need a win over Southern University on Sunday in Baton Rouge to clinch its second-consecutive winning season and third in four years. If so, this season’s squad will become the first LSU team in history to record back-to-back winning season since the 1995 and 1996 Tiger teams.

Arkansas took a 1-0 lead less than 10 minutes into the match as sophomore midfielder Megan McCool recorded her fourth goal of the season. The assists were credited to seniors Kendall Cox and Julie Williford. The Tigers responded as freshman Julie Neumann, making her first-career start, scored the first goal of her career on a header following a corner kick by senior Stephanie Keating with just over 23 minutes remaining.

The Lady’Backs broke the tie at the 14:07 mark of the half as Williford scored her 13th goal of the season with the assist credited to freshman Allison Harris. LSU once again answered an Arkansas goal as freshman forward Stacy Bishop tied teammate Artie Brown for the team lead in goals with her 12th to knot the score at 2-2 with 11:54 left in the half.

Arkansas regained the lead at the 6:54 mark as freshman Kristie Holman scored her second goal of the season, connecting on a free kick past LSU goalkeeper Robyn DesOrmeaux. Holman was fouled outside the box and then rifled the ball into the left corner of the net past DesOrmeaux. Arkansas took their 3-2 lead into halftime, out-shooting LSU 13-6.

The Tigers will close the season on Sunday versus Southern University at 2 p.m. at the LSU Soccer Complex in Baton Rouge. LSU will honor six seniors in a post game ceremony on “Senior Day”.