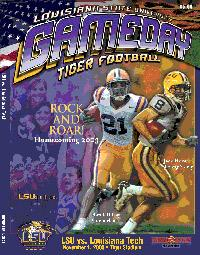 BATON ROUGE — Last week, LSU’s defense got challenged by one of the nation’s top rushing teams. This week, one of the best in the nation at throwing the football comes to Tiger Stadium as Louisiana Tech’s high-powered offense takes on one of the best defenses in the country at 7 p.m. on Saturday.

LSU enters the contest ranked as high as No. 7 in the nation and the Tigers also hold down the No. 7 spot in the Bowl Championship Series Standings heading into Saturday’s contest. The Tigers will carry a 7-1 overall mark into the game, while the Bulldogs have won two of their last three and stand at 4-4 overall. This will be the first meeting between the teams since a 25-0 LSU win in 1941.

A week ago, LSU limited Auburn and to 150 rushing yards below its season average, holding the Tigers to only 50 yards. LSU won last week by a 31-7 count, its biggest win over Auburn since a 35-7 victory in 1972.

This week, the Tiger defense will be out to stop Tech quarterback Luke McCown, who’s thrown for over 12,000 yards and 82 touchdowns during his career. This season, McCown ranks among the top 10 quarterbacks in the nation by averaging 311 yards passing over the Bulldogs’ first eight games.

“This is a difficult preparation for us on defense because of all the different things they do on offense like no-huddle,” LSU coach Nick Saban said this week. “It’s always a little more difficult to practice like that and is always harder on the players.

“I think in a game like this, big plays and turnovers, and affecting the quarterback with coverage or pressure or whatever, those are always going to be things that affect the outcome of the game. It is Homecoming for us which makes it a traditional game that you would certainly like to be successful in and as many points as they score they are capable of beating anybody.”

Offensively, the Tigers will continue to revolve around the play of quarterback Matt Mauck, who ranks second in the SEC with 15 passing touchdowns this year. Through eight games, Mauck has completed 132 of 210 passes for 1,613 yards. He’s only thrown seven interceptions all season.

Mauck’s top targets have been Michael Clayton and Devery Henderson. Clayton, a semifinalist for the Biletnikoff Award, leads LSU with 41 catches for 620 yards and five touchdowns. Henderson leads the Tigers with seven TD receptions. He’s also caught 36 passes for 530 yards, including a 64-yarder for a TD last week in the first quarter against Auburn.

The Tiger running games has picked up over the last two weeks with the emergence of freshmen Justin Vincent and Alley Broussard. Vincent is coming off a 127- yard performance against Auburn, while Broussard rushed for 108 yards in the win over South Carolina. Vincent and Broussard are the first two true freshman running backs to rush for 100 yards in a game in the same season since Dalton Hilliard and Gary James in 1982.

The Tigers are also expecting to get back the services of running backs Joseph Addai and Shyrone Carey on Saturday, giving the Tigers four capable backs. Addai has missed LSU’s last two games with a knee injury, while Carey has been out three weeks with an injured knee.

“Hopefully, offensively we will continue to be able to make the improvements and put things together like we have been able to the last two games,” Saban said. “Maybe we can throw some big plays in there somewhere, because even though we have played well, we have only had a few of those. With the kind of players we have that is certainly something that we would like to do.”

After Saturday’s game, the Tigers will have a week off before traveling to face Alabama in Tuscaloosa on Nov. 15. The Tigers then face Ole Miss in Oxford on Nov. 22, followed by the season-finale against Arkansas in Tiger Stadium on Nov. 28.