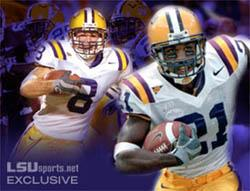 Randall Gay has seen it all during his four seasons as an LSU defensive back-from virtually every position in the secondary. Whether he’s playing cornerback, safety, “star” or “money,” Gay is affecting the execution of opposing offenses.

Gay, a marketing major, started 12 games last season at cornerback, and this season he is getting the majority of snaps at “star,” the fifth defensive back in LSU’s nickel package. The 5-11, 178-pound senior from Brusly, La., has also seen action at free safety and at “money”-the sixth DB in the Tigers’ dime defense-during his career.

Though he excels at all of the positions, Gay said he prefers the one-on-one challenges playing cornerback presents.

“I’d rather play cornerback. I’d rather be up close to the action than in the back,” he said. “At safety, it just feels like you’re floating around doing nothing. At corner, you’re up there, man-to-man. It’s like, ‘It’s me and you, let’s see what you can do and I’ll see what I can do.'”

“In our defense, you have to be ready for everything,” he said. “Blitz, tackle, cover; we have to know all kinds of assignments. We have to know what the linemen are doing up front to know where we have to fill on the run. It educates you, it forces you to become football-minded. Since I’ve been here, I’ve learned so much about the game of football.”

Gay nearly missed the chance to continue his football education at LSU. He wasn’t recruited during his senior year by the staff of former coach Gerry DiNardo, so Gay took an official visit to the University of Alabama.

“I was on my recruiting trip to Alabama, and I was homesick,” he recalled. “I guess I felt I was about to commit to Alabama and reality hit me-I wasn’t ready to leave home. I talked with my mom, and she said she didn’t want me to leave either.”

Fortunately, before Gay committed to Alabama, Nick Saban replaced DiNardo at LSU. Saban and his staff quickly expressed an interest in Gay’s talents.

“My high school coach (Brady Perry) called me and told me that LSU wanted to offer me a scholarship,” Gay said. “I wasn’t ready to leave home, and I committed to LSU.”

Gay thus became part of Saban’s first LSU recruiting class that, though lacking the lofty rankings of subsequent classes, has produced several impact players. Ten members of the class of 2000 have played as starters this season.

“When we came in, people were saying we were the ‘put-together’ class,” Gay said, laughing. “Lately, LSU has had No. 1 recruiting classes; I think we were ranked No. 80. People didn’t expect much from us, but if you look at the leaders on our team this year, it’s mostly that class. Everybody has stepped their game up, and we hope to lead the team and give them the mindset of winning all the time. We want to be among the elite teams in college football, the teams that put fear in the opponents’ eyes when they step on the field. I think we can have that type of program at LSU.”

One of Gay’s fellow members of that first recruiting class is senior strong safety Jack Hunt, who played his first two LSU seasons as a reserve wide receiver before making a switch to free safety before 2002 spring practice.

Hunt, a product of Ruston (La.) High School, said he welcomed the change to defense that Saban proposed.

“I had actually wanted to swap,” Hunt recalled. “In the meeting before spring practice, I was going to ask Coach because we had lost a couple of safeties from the season before, and I knew we would be short-handed.”

Hunt said the transition, though initially daunting, was ultimately rewarding.

Hunt, a pre-medicine major, started LSU’s final five games in 2002 at free safety and, after bulking up to nearly 200 pounds during the off-season, he was moved to strong safety prior to the Tigers’ first game of 2003.

“The biggest difference between the safety positions is that you’re more like a semi-linebacker at strong safety,” Hunt said. “You’re the extra defender on running plays, and you have to be able to read your keys as far as the runs go. You have to know where to go and be aggressive against the run. I feel the extra weight I put on has helped a lot this season. I feel like I’m delivering more of the blow now and knocking them back sometimes. That’s a lot better feeling.”

“I just think last year Jack was a first-year player in the secondary,” Saban said. “We had just moved him in the spring. He was learning how to play defense, learning the system, learning how to tackle for the first time since high school.”

Hunt’s exceptional instincts allow him to serve as the “quarterback” of the defense, as he insures his teammates are in the right positions to make plays.

“Certainly Jack has been the guy who holds it together in the secondary in terms of making checks and those types of things,” Saban said. “I’m very, very pleased with the progress he made from last year to this year and how he’s playing. I think Jack’s a smart guy who actually makes a lot of improvement because he learns things and can apply them on the field. Some players do that more quickly than others, and Jack’s done it exceptionally well for us.”

“This year we have 11 guys on the field who know what to do all the time,” said Hunt, who is second on the squad with 44 tackles. “This year everybody knows what to do and is executing.”

Hunt is having the time of his life as he prepares for the final two months of his college football career. The sacrifices he has made as a student-athlete are providing substantial benefits.

“I’ve learned a lot of discipline through football,” he said. “Anything that you do in life, you get out what you put into it. I’ve put a lot into being a football player here, and now I’m starting to get some of it back and I’m really enjoying it.”