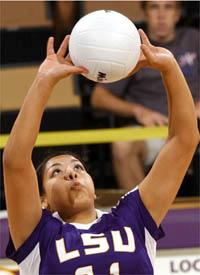 BATON ROUGE — Coming off a key win over Tennessee last Sunday, the LSU volleyball team will close out the 2003 home schedule this weekend against Southeastern Conference rivals Mississippi State on Friday at 7 p.m. and Ole Miss on Sunday at 1:30 p.m. in the Maravich Center.

“It is important that we maintain our level of play in terms of intensity and competitiveness this weekend,” said LSU head coach Fran Flory. “The teams that we have coming in this weekend kind of have their backs against the wall and are fighting for their survival. Teams like that try to create situations for themselves and we just need to maintain what we have been doing.”

LSU can take a major step towards clinching a spot in the SEC Tournament this weekend. Eight of the 11 conference teams qualify for the tournament, which will be held from Nov. 21-23 in Columbia, S.C.

Mississippi State has been eliminated from tournament consideration. An LSU win, coupled with an Auburn loss would eliminate AU from consideration. The only remaining team that could overtake LSU for a spot in the tournament would be Ole Miss. If the Tigers defeat the Rebels on Sunday, they could all but ensure themselves of a tournament berth.

“Every match is vital for us in the SEC right now,” said Flory. “We have created some opportunities for ourselves in the last few weeks with some big wins and we can’t look past the two teams that are coming in here this week. We need to understand that any divisional match is crucial in determining how we finish the season. I think that two wins this weekend will all but guarantee us a spot in the SEC Tournament and after that we can play for seeding.”

LSU is still in contention for second place in the SEC Western Division. The Tigers are currently tied with Alabama in the West with six matches remaining. The second place finish could come down to the final match of the regular season when LSU travels to take on the Crimson Tide in Tuscaloosa, Ala., on Nov. 16.

The Tigers can take a step towards their goals against Mississippi State on Friday night. LSU swept the Bulldogs in Starkville earlier this season, their only conference sweep of the year. The Tigers recorded a season-best 10 service aces in the win. The team also hit .200 for the match, compared to just a .078 clip for MSU. The Tigers also outblocked the Bulldogs, 10-7, and outdug Mississippi State, 40-33.

Reigning SEC Defensive Player of the Week Regan Hood led LSU with 14 kills, six blocks and a career-high four service aces. The junior from Carrollton, Texas, also hit a team-best .385 for the match with eight digs.

The Tigers are on the road the remainder of the season. LSU travels to take on Georgia and No. 3 Florida next weekend. The Tigers will take on the Bulldogs in Athens, Ga., on Friday at 7 p.m. EST before matching up with the third-ranked Gators in Gainesville, Fla., on Sunday at 1:30 p.m. EST.