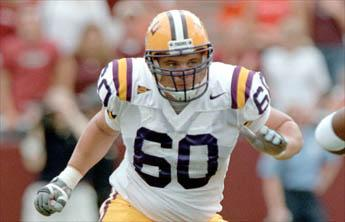 BATON ROUGE — Rodney Reed, who is one of the most decorated student-athletes in LSU football history, added another honor to an already impressive resume as he was selected as a National Scholar-Athlete by the National Football Foundation, the organization announced on Wednesday.

The award is one of the top academic honors available to a college football player and it carries with it an $18,000 post-graduate scholarship.

Reed is one of only 15 football players covering all NCAA divisions as well as NAIA to receive the award. He also becomes the second National Scholar-Athlete in as many years for LSU, joining Bradie James, who was honored last year.

Reed, a native of West Monroe, La., graduated in May with a 3.94 grade point average in accounting. He is currently enrolled in graduate school at LSU, pursuing a Master’s degree in accounting.

“This is a tremendous honor and something that I am extremely proud of,” Reed said. “It is quite an accomplishment that two student-athletes from the same school have won the award two years in a row. It’s good to get recognized and it speaks well for the program. I think this also speaks highly for the academic center and the way Coach Saban stresses academics and not just football.”

This year, Reed has started all eight games at right tackle for the Tigers, helping lead LSU to a 7-1 overall mark and a No. 7 national ranking. Reed’s in his fourth year as a starter on the offensive line and he’s guided the Tigers to a 31-11 mark during that span.

In 508 snaps this season, Reed hasn’t allowed a sack and he’s been whistled for just three penalties. In addition, he’s among the team leaders with 46 knockdowns to go with six pancake blocks.

“Since 1959, these highly sought after awards have recognized only a chosen few who have excelled above all in the areas of scholarship, citizenship and athletic performance,” National Football Foundation Chairman Jon F. Hanson said. “We are pleased to have this opportunity to honor these outstanding young men for all of their achievements with an $18,000 post-graduate scholarship.”

To be eligible for a National Football Foundation and College Hall of Fame postgraduate fellowship, the nominee must be a senior or graduate student in his final year of eligibility, have a grade point average of at least a 3.0 on a 4.0 scale, have shown superior academic application and performance, have outstanding football ability as a first team player, and have demonstrated strong leadership and citizenship.

“The 15 exceptional scholar-athletes we chose this year represent the best and brightest this nation has to offer in all playing levels,” state Robert E. Mulcahy III, chairman of the Awards Committee and director of athletics at Rutgers University. “Each year it seems the talent pool continues to expand, and our job to select the most deserving individuals gets more difficult.”

The 15 scholar-athletes will be recognized at the National Football Foundation and College Hall of Fame’s 46th Annual Awards Dinner on Dec. 9 at the Waldorf-Astoria in New York City. Also being honored at the dinner will be the 2003 College Football Hall of Fame class.