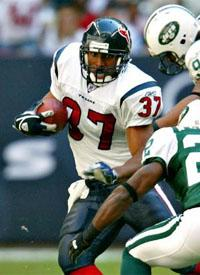 “We’ve been impressed with him since day one, ” Texans head coach Dom Capers said. “Domanick has exhibited a really good work ethic. He’s come and he’s been impressive in the classroom and in the weight room. He’s a mature guy and he understands how important preparation is. His production on the field earned him the starting job. That’s the way you get things done in this business, you go out and you earn it by what you do on the field. Well done is a lot better than well said in this business. “

Davis (5-9, 210) leads all NFL rookies with 87 rushes for 409 yards and two touchdowns and he is third in the NFL among rookies with 29 receptions for 231 yards (first among rookie running backs). Davis had his best month in October by recording 464 total yards (297 rushing, 167 receiving) in only three games.

“Winning this award is a dream come true,” Davis said. ” I finally got a chance to show what I’m capable of and I am very thankful for that. The offensive line has done a great job blocking up front and the receivers have done a great job at blocking downfield for me. I’m giving all of the credit to them first. I’m happy to make the most of my opportunities. “

After a standout career at LSU, the Texans selected Davis with the 101st pick in the fourth round of the 2003 NFL Draft. He finished his career ranked second in LSU history and third in SEC history with 5,743 all-purpose yards. Davis, a native of Lafayette, La., prepped at Breaux Bridge High School.