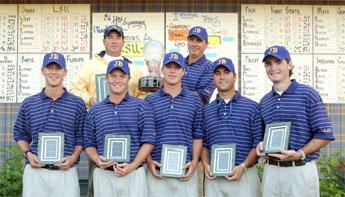 The Tigers, who entered Tuesday’s final round with a two-stroke advantage over the 17th-ranked Razorbacks, held on to their lead partly in thanks to juniors Heath West and Brandon Aydlett, who each fired 2-under-par 70s to lead LSU to its third CCLA title and first since 2000. West, a native of Dothan, Ala., finished with a 5-under 211 in a tie for second place with Baylor’s Ryan Baca. West has now placed in the top 10 in four-straight tournaments and now has two top five’s this season.

“We knew Arkansas was a good, talented team, and they proved it because they really came after us and we had to fight hard to hold them off,” said LSU head coach Greg Jones.

Arkansas’s Seth Murphy missed a fairly short putt on No. 18 which would have forced a playoff with LSU. Murphy ended at 2-under 214 to tie for seventh with SMU’s Jerad Harklau.

LSU wore commemorative “JB” hats in honor of longtime LSU equipment manager Jeff Boss, who passed away on Monday after suffering a brain tumor in January. On a spectacular autumn day in Baton Rouge, Jones said he dedicated the Tigers’ victory to Boss.

“Wearing these “JB” hats makes this day even more special, and I cannot wait to hang the picture of us holding the trophy with the hats on in the Jeff Boss Locker Room, because that will be a special moment for me and my team,” said Jones.

“I can’t wait to hang that picture, I am looking forward to that moment, but I really wish I could hand that picture to him,” Jones said.

Arkansas finished at 6-under 858, shooting even par for the second-straight round. North Florida, the 1999 CCLA champion, placed third at 2-under 862. SMU finished fourth at 2-over 866 while 2001 champ UAB placed fifth at 6-over 870. The 15-team field featured seven teams currently ranked in the top 60 of the latest Golfweek rankings, including No. 18 Georgia Southern, who placed in a tie for sixth, and No. 29 Vanderbilt, who finished tied for 10th place.

North Florida’s Michael Young, a freshman from Jacksonville, Fla., claimed medallist honors by firing an 8-under 208, becoming the second player from North Florida to win the CCLA, joining David Bennett, who won in 1999. West and Baca tied for second place, while Vanderbilt freshman Luke List finished fourth at 4-under 212. List tied a CCLA individual record by shooting a 7-under 65 in Tuesday’s final round. List joins Auburn’s Lee Williams as the only players to ever shoot a 65 in tournament history. UAB’s Tigh VanLeeuwen and Aydlett tied for fifth place at 3-under 213. Aydlett finished with rounds of 69-70 to record his first-career top-10 finish.

“Heath West played like a champion this week and he has played that way all season, I mean what more can you say about him,” said Jones.

“Well, it was a nice fall four our team, we reached some goals and we shot a 289 today which is a nice round,” said Jones. “We played smart, solid, and aggressive today, and I am happy because I challenged the guys before we started today to play a little more aggressive and they did.”

“What is impressive is after Garrett (Prather) shot a 10 on No. 2, we played basically four-legged, and we overcame that and were able to win,” said Jones. “I was hoping that the other guys would not find out about Garrett’s score, and even though they did we still did our job.”

The Tigers won their second tournament of the season and Jones earned his eighth win in now his fifth season at the helm. LSU ended the fall season by finishing no worse than seventh in any of its five tournaments. The Tigers shot a 4-over 868 to win the Baylor Invitational on Sept. 30 in Waco, Texas.

LSU will open its spring season with the Gator Invitational on Jan. 31-Feb. 1 in Gainesville, Fla. The Tigers will also host the LSU Spring Invitational from April 2-4 at the University Club in Baton Rouge, La.