Tigers Leap to No. 7 in Latest BCS Rankings 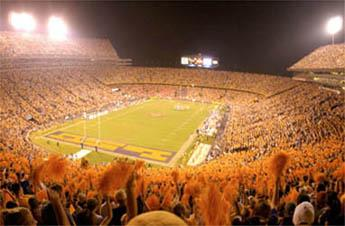 BATON ROUGE — LSU jumped five spots to No. 7 in this week’s edition of the Bowl Championship Series Standings, which was released by the National Football Foundation on Monday afternoon.

By virtue of its 31-7 win over Auburn on Saturday, the Tigers leaped from No. 12 to their current standing at No. 7. In the process, LSU moved past Washington State, Nebraska, Purdue, Northern Illinois and Virginia Tech.

LSU’s No. 7 BCS standing is the highest in-season ranking ever for the Tigers. Last year, the Tigers debuted at No. 9 in the first BCS poll.

Oklahoma continues to be No. 1 in the BCS standings, followed by Miami, Florida State, Southern Cal, and Georgia. Ohio State starts the bottom half of the top 10, followed by LSU, Washington State, Nebraska and Michigan State.

Other SEC teams in the BCS standings include Tennessee at No. 15 and Florida at No. 21.

The Tigers return to action on Saturday as they host Louisiana Tech in Tiger Stadium at 7 p.m.