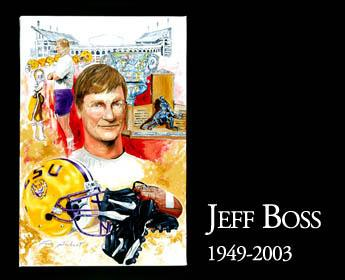 BATON ROUGE — Jeff Boss, the equipment manager for the LSU football team as well as the athletics department since 1980, passed away on Monday after a 10-month battle with brain cancer.

Boss, who is survived by his wife, Karen and daughter, B.J., was 54-years old.

“A part of LSU died today,” LSU Director of Athletics Skip Bertman said. “Jeff Boss was at the heart of everything that LSU stands for. His positive attitude each and every day of the year was an inspiration to everyone who crossed his path. He made LSU a better place to be.

“The arms of the LSU Athletics Department will always be open to Karen and B.J. and they will forever be a part of our family.”

Boss was diagnosed with a brain tumor shortly after the Tigers returned from the Cotton Bowl last January. A native of Lake Charles, La., and a graduate of McNeese State University, Boss was in his 24th season as LSU’s equipment manager. He continued to work while undergoing treatment for his illness until June.

LSU honored its longtime equipment manager on Sept. 29 with a formal ceremony that officially named the locker room in his honor. Boss was held in such high-regard that dozens of former players and managers returned to campus for the ceremony.

Boss had such a positive impact on his student managers that no less than 14 of them went on to make it their profession. Today, student managers under Boss now work as full-time equipment managers at LSU, Oklahoma State, Tulane, Texas A&M, and Texas, while two are football operations directors at TCU and Clemson.

“Jeff Boss was the best at what he did,” LSU coach Nick Saban said on Monday. “He was without a doubt one of the absolute best people that you’d ever meet. You don’t have many chances to meet someone who was as selfless as Jeff. He was always thinking of others and putting their feelings first. That quality above all others is something special that I wish everyone had and I know it would make the world a much better place because it certainly made LSU a better place.

“Jeff Boss was loved by everyone in our organization and our thoughts and prayers certainly go out to Karen and B.J. and the rest of his family. We are going to miss him.”

Boss wasn’t on the sidelines for LSU’s game against Louisiana-Monroe to open the 2003 season, the first time he’s missed an LSU game in 24 years. Two weeks later, Saban along with a dozen football players visited Boss at his home and presented him with a game ball from the Louisiana-Monroe contest.

LSU has dedicated the 2003 season to Boss and the Tigers will wear the letters “JB” on their back of their helmets for the remainder of the season.

During his illustrious career, one that saw Boss always work behind the scenes with little or no fanfare, he was named the winner of the Glenn Sharp Award in 1990, which goes annually to the Equipment Manager of the Year as chosen by his peers. Boss’ years of expertise in the field of equipment management also aided him in the design and development of a football shoe, the “Boss Shark”, which was nationally marketed for intercollegiate play by Nike.

“I don’t think there is anyone in this program in the four years I have been here, that gave more unselfish devotion to LSU, but probably more importantly to the players themselves,” Saban said at the locker room dedication ceremony of Jeff Boss. ” There is not one person in our organization that the players held in higher regard for what he did for them.”

Boss came to LSU from Morgan City High School, where he served as a teacher and football coach for five years. He also held similar positions at Kaplan High School in 1974-75. Boss began his athletic administration career at Franklin Junior High in 1972 before serving as athletic director and head football coach there in 1973-74.

Visitation for Boss will be held at 11:30 a.m. on Wednesday at the First United Methodist Church on North Boulevard in downtown Baton Rouge. A memorial service will follow at 12:30 p.m. In of lieu of flowers, the family asked that donations be sent to Mary Bird Perkins Cancer Center or to the Hospice Foundation of Greater Baton Rouge.