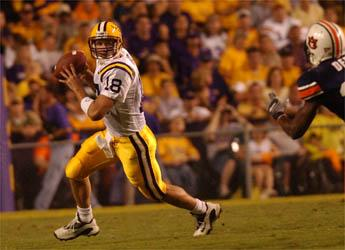 RUSTON, La. — A pair of LSU players who helped the Tigers gain control of the Southeastern Conference Western Division race with a 31-7 victory over 17th-ranked Auburn were named players of the week by the Louisiana Sports Writers Association on Monday.

Mauck directed LSU to 21 first quarter points as the junior completed 17-of-28 passes for 224 yards and three touchdowns. The Jasper, Indiana native connected with Devery Henderson on a 64-yard scoring strike on the game’s sixth play to give LSU’s its first score. The game marked the fifth three- touchdown game of Mauck’s career.

Lavalais dominated the Auburn offensive line as he posted eight tackles including three for losses and one sack in the LSU victory as he was named the SEC Defensive player of the week.

The senior played a huge part as the LSU defense limited Auburn to 50 yards rushing, 150 below its average. The Marksville native came up with two big plays early in the game for LSU. He stopped Auburn running back Cadillac Williams on a fourth and one play for a five-yard loss that led to an LSU touchdown. On Auburn’s next possession he recorded a 13-yard sack of Auburn quarterback Jason Campbell.

The Louisiana Sports Writers Association player of the week awards are voted on by a panel of voters across the state. The players are nomination by the sports information directors at the football playing institutions in Louisiana.

LSWA Players of the Week